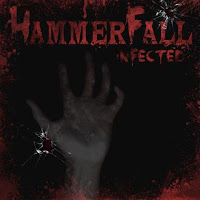 I'm sure I wasn't alone in being taken aback by the advance art and cover image for the latest HammerFall album, which perhaps was more fitting to the next Left 4 Dead sequel, or perhaps 28 Decades Later. A power metal band taking zombies head on? Would it be a concept album with a sequential narrative? A gaggle of songs about horror topics? As it turns out, Infected, the Swedish mainstay's 8th full-length is not necessarily such, but instead a pretty standard and inconsequential effort not unlike the last handful. There was some dread, some apprehension that the band might be trying to go all groove and heavy here, but that's not at all the case. This is business as usual, a selection of rather mediocre tracks with a few highlights that aren't enough to heave it over the threshold of quality.

No, this is not the Glory to the Brave II that many HammerFall fans of old have undoubtedly anticipated, and in fact it's not even the measure of their last, average record No Sacrifice, No Victory. What stuns me is the lack of effective or memorable chorus sequences throughout, just a lot of humdrum and melodramatic fist pumpers that go absolutely nowhere, a few borderline offensive as they're so damned cheesy. Do we really need a crappy acronym anthem for "Bang Your Head", "B.Y.H."? For that matter, do we really need another song called "Bang Your Head"? Only one of them matters folks, and it's not fucking this one, a dreary and uninspired anthem that must have taken Dronjak and company less than 10 minutes to fully compose. Then there's the actual zombie epic, "Patient Zero" which I had hoped might justify its tacky film-like intro, but winds up just an assortment of pretty average riffs and no real vocal payoff.

Other sodden compositions here include the militant flag waver "One More Time", the drippy ballad "Send Me a Sign" (hoorah for creative song titles), and the totally dorky "I Refuse" which sounds like Captain Planet and his Planeteers trying to write an AC/DC tune. "Let's Get It On" and "Redemption" are your standard HammerFall filler, and probably the only two songs I got a positive reaction on were "The Outlaw" and the faster speed/power piece "Dia De Los Muertos". It's true that the band do cover more occult and horror topics in the lyrics than usual, but there is no real unified undead concept, and the music itself is so typically uplifting that it creates a bizarre contrast with the theme and artwork. And not in a good way, like, say, Powerwolf.

Don't get me wrong, there's enough professionalism and production quality here to ensure that Infected doesn't fall wholly into the suck-pile, but for the songwriting it's got to be the single worst HammerFall album to date, and I was really hoping it might turn out to be the cusp of a cool new direction for the band. It's your typical, shoddy, big budget power/heavy metal album out of Europe, with clean performances, next to no wanking, and unfortunately, next to no songs worth hearing. These Swedes just don't do 'dark' very well...