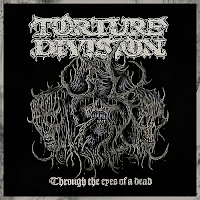 Torture Division are back with another new demo (download page here) for us cheap bastards to enjoy (download their whole catalog for free or donate if you like metal - I've ponied up almost $50 over the years it seems). While I found Evighetens Dårar III a bit lackluster, Through the Eyes of a Dead has made up for it by being in my opinion, the best thing these Swedes have ever recorded coupled with the best mix Dan Swanö has ever (graciously) done for them as well.

What I Liked:
This is pure Torture Division-styled classic death metal with the Swedish punk/d-beat energetic backbone that I have always felt these guys pull off better than some bigger bands of the style such as Vomitory. You can never say that Torture Division play without heart, and you can really tell these Swedes just love metal. That being said it doesn't hurt that they can also write a catchy tune. Lyrically this is not much different than past Torture Division albums - verging from near slam death metal level lyrics ("Clark the Monarch" detailing a near-legendary crazy drug-dealer or addict [can't figure out which]) to more punk themed songs ("Vampire Empire", a song about a pissed off and angst ridden 16 year-old vampire). As always, Torture Division pull both off with style that will have you banging your head.

Overall I just find these guys to be fun to listen to. Lord K.'s guitar is heavier than ever making the groovy riffs extremely satisfying - check out the midsection of "Vampire Empire" from 1:15 onwards for proof. Tobias Gustafsson's drums are the usual d-beat/death metal mix that it's always been, he sounds really good in this release - props to Dan Swanö again on the mix. Again Jörgen Sandström's has the dual duty of bass and vocals - his bass sounds awesome though mostly follows the guitar and drums as in the past releases; the vocals on the other hand are like a gruffier Johan Hegg mixed with some interspersed screams for effect - pretty catchy vocal patterns at times, especially "Clark the Monarch", though not nearly as catchy as Hegg's stuff in Amon Amarth.

I also want to touch on the Mastodon cover of "Iron Tusk" that they released around the exact same time as this demo because it's awesome. Having really loved the original, I can say that Torture Division fucking turn it to 11 with this one and really make a unique cover (direct download here).

What I Didn't Like:
How I have to wait for the next demo - while this is the most satisfying Torture Division demo it's still not enough. Knowing that all the music for the next demo is just waiting to be recorded sometime this summer is reassuring at least.

This is how I like my metal to be - recorded with love and care.

http://www.torturedivision.net/
Posted by Narian at 1:45 PM