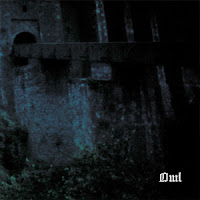 There's been a good share of hype surrounding this Owl s/t, as will be the case with any side project from a competent and talented individual like Christian Kolf. If you've had the pleasure of his other works, like the tranquil Island or the impressive Woburn House, you will understand that this gentleman has an eclectic taste for transforming given genres into transcendent works of atmosphere, and Owl is not an exception to this technique. The roots here lie within the field of old, drudging death circa Incantation, and the time is right for striking up this particular match: this end of the spectrum is currently populated with a wealth of promising acts who strive for the same strain of nostalgia and mood.

Naturally, Kolf has come up with something even more atmospheric than one expect from his cavernous, grim peers, and he performs most of the instruments himself. Owl ranges from long periods of guttural morbidity and simplistic death/doom riffing to more progressive, folksy passages and cleaner vocals redolent of his Zeitgeister kin Klabautamann, Island, and so forth. It seeks to swallow the listener whole into its ebbing portrait of loss, and does so not only with the musical palette but also the extensive song titles like "Lost in Vaults Underneath the Melting Mountain of the Saints", "Spell of the Ignis Fatuus That Leads to the Impalpable Altar of Beasts" or "The Daimonion of Dying Summers Looming Through the Golden Mist of Dreams". I wasn't sure if he was attempting an ironic humor here (akin to Bal-Sagoth and their vernacular excess), but the songs certainly seem like none other than serious business. Though they often drag on as lengthily as their song titles, swollen with needless, solemn debris, there are at least a few moments of excitement, some memorable bones dug out from the skeletons of the songs that prevent the desolate ennui that I was dreading.

But this is only the first half of the album, comprised of four tracks. The latter is but a single, 30+ minute, yawning ambient piece titled "Threnodical Ritual at the Spectral Shores of the Eternal Sunset", primarily built from dull, resonating organ tones and then samples of things like lapping shores. Ever so slowly, the minimal patterns of notes here shift about, but if one is not in the mood for such a melancholic backdrop then I'm afraid he/she might find this fragment of Owl to be a dreadful bore. Had the metal hymns been more absorbing, I might have found this piece to provide a curious contrast, but alas, I often had to struggle just to get through the inaugural din of "Conquering the Kingdom of Rain (Enter Her Holy Halls)", which is over 13 minutes itself, so while it succeeds in its atmospheric ambitions, I felt as if it was constantly hovering at the precipice of my attention span.

Don't let me delude you into thinking this album is merely 'slow', because there is some blasting involved as in "Lost in Vaults...", and that's perhaps the track I enjoyed the most for the ringing, eerie melodies and momentum. It's not without some variation, and the lyrics create a vigorous, varied imagery to accompany the meter of the instruments. Owl provides a more drawn out alternative to other commodious chasms of sorrow like Chile's Godless, Australian circus act Portal or Vancouver's Mitochondrion, but unlike Kolf's other involvements, I felt that the vision and mood created here were often more compelling than the actual music, and it only just scrapes by on its artistic merit.