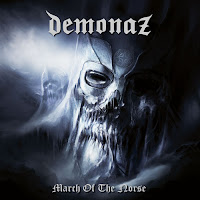 If Demonaz Doom Occulta's first solo effort sounds like some pseudo sequel to I's 2006 debut Between Two Worlds, that's because it is aesthetically quite similar. Bridging the epic Viking black tradition of latter day Immortal and the traditional, hard hitting heavy metal of 80s enthusiasts like Manowar, Heavy Load, Brocas Helm and Manilla Road, he's crafted yet another successful experience of elegant, powerful fare with the rare ability to soothe one's heart while crushing his spirit across the winter wastes. If you enjoyed Between Two Worlds, or Immortal's latest albums All Shall Fall and Sons of Northern Darkness, then you'll be quite comfy with such accessible hooks and strong, simple songwriting.

Now, Demonaz himself did not perform on Between Two Worlds, but he did write the lyrics, and his partners here, guitarist Ice Dale and drummer Armagedda were both culled from that other project's lineup. A natural fit, as the extended Immortal family seems to have a long legacy of lasting friendships that seems so rare in the seething hate-scape of the black metal scene, and it continues to work well through the March of the Norse. Climactic elevations of melodic power and weighted rhythms dominate cuts like the pumping title track and the soaring "Where Gods Once Rode", with all the blunt folk mysticism of Bathory's post-Hammerheart continuum (thrash misfires aside). Demonaz himself has a slightly grimier form of address than Abbath uses in I or Immortal, but its nonetheless emotionally enduring and effective.

There's really not a bad song in this bunch, but my preference lies towards the dramatic "Over the Mountains" with the solemn guitar hooks in the verses, and the instrumental bonus track "Dying Sun" which flows like runoff from a Summer heated glacier; melancholic blues rock well suited to any sorrow choked circumstance. If it's glory you seek, though, you'll be hard pressed to take "Legends of Fire and Ice", "All Blackened Sky", or those mentioned in the second 'graph for granted. The riffs are rarely subtle or intricate, but the splice of open, ringing chords and strings casts the same icy glamour as Between Two Worlds or All Shall Fall, so even when the most predictable pattern is being practiced, it still seems to function within the trio's capable handiwork.

I felt that the material was more immediately accessible than I, which took me some time to develop a fondness towards, and ultimately not quite that strong, but I can't think of any reason a fan of that would avoid March of the Norse. The lyrical themes might seem as if they've run their course by now (Demonaz has been scribing Immortal lyrics for well over a decade), but driven by such wanderlust as the atmosphere of this album provides, there is a timeless appeal unlikely to interfere with the audience's appreciation. The production is superb, the songs have a lot of replay value. Inspiring. Driving. Viking as fuck. Memorable, gleaming metal set against a night black background. Fit for every soul that has ever stared across a snowy expanse, tracing the sun's course upon the frost, and wondered.