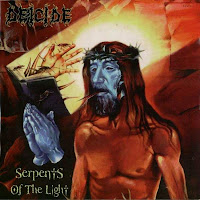 I held out a lot of hope that Serpents of the Light would be the first Deicide album to truly knock me over, the first to reflect the band's considerable cushion of hype. In reality, it's just more of what the band were peddling on the previous album, Once Upon the Cross. A fraction more melodic and accessible, perhaps even a bit faster, but nothing new under the sun. This was also about the time that I grew tired of the band's ceaseless Christian rending quips. Its not because I oppose the message. It's not that I have ever felt offended, or that I subscribe to any religious group think whatsoever, but how many times can you just say the same shit over and over again before it becomes tired and dull, nothing more than petulant paraphrasing? There must have been a more curious and compelling way of stating it all, without abandoning the position. Yeah, God is such a grand deception, his believers all fools, but hey, he keeps us our merch table busy!

The cover might be abstract and interesting, but Serpents of the Light continues the band's long streak as the most 'evil' band alive in name, but not in actual musical content. Stock, brutal death metal with a competent level of dynamic variation, but nothing evocative or morbid, no parasitic patterns of notation that squeeze into your ears and lay their clutches of brain and soul sucking spawn. These guys are no slouches, they can compose and adhere manageable riffs to Steve Asheim's storming fury and footwork, but so few of them have the hooks to warrant repeated exposure. The most diabolic moment of the album comes in the intro to "Serpents of the Light" itself, in which Benton growls off against himself with some resonant, but after this it all becomes so...plain. Tracks like "Bastard of Christ" and "This is Hell We're In" are seasoned with explosive velocity, yet beyond the percussive dynamic of the vocals and the old school purity, there's never anything waiting in the depths. No grinning Leviathan to grasp and drown you in damnation.

They do a decent enough job in alternating speed with their monstrous chugging breakdowns, but there's nothing here to challenge or rival the clinical sadism of Deicide or Legion. Nothing ever evolves beyond that point, not that it's some mandate, but it might increase the album's staying power. Perhaps its most potent and entertaining vector are the Hoffman leads, which slice through the battering undercurrent like hot sharp knives through clerical vestments. They have a similar ability to bands like early Slayer and Pestilence to tear off into a disharmonious dive bombing wail that truly corners and bewilders the ear. I also liked that Benton continued to favor his death grunts over the malicious, Salacious Crumb scratching that he usually layers in. Not that the latter is absent here, but the bludgeoning deeper end is surely prevalent. The mix of the record is average Morrisound: crushing and clear enough, but flat and devoid of real depth. At the end of the day, it's neither a Deicide standout or a sucker. The Bible Belters must have been shaking in their boots when they heard this one! But really, no.