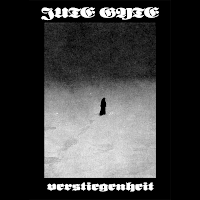 Missouri's Jute Gyte continues to lead an impressive double life as an experimental/ambient obscurity and an adventurous black metal combo. Verstiegenheit is the latest evocation of the latter, following upon the poignant heels of prior efforts like Old Ways (2008) and Eagle Heart (2010). Wrought from a moral haze, sauteed in emotional escapism, and primed in a stark poetic discourse. You'll of course experience all of the baleful repetition and raw potency you'd expect from other 'bedroom' acts within the black metal genre at large, but Adam Kalmbach assures more than a mere mirror to the familiar nihilistic pandering, but layers of nuance and substrate that catch at the edge of perception like muted specters hidden in a watercolor painting.

From the onset, Versteigenheit operates under the deceit of a straight black metal affair than either of the other albums I've covered, "Gates of Day and Night" providing roughly nine minutes of grim, charging abandon. However, despite the monotony of the drum sequence, and the Burzum-like grated torment of Kalmbach's vocal presence, the choice in chords is incredibly curious, almost like a mesh of accelerated grunge and 90s noise rock rather than the bleeding Scandinavian miasma of oppression. This is further expounded within the next track, "Apparitions in the Woodlands at Dusk", in which a similar rush of pummeling chords are affixed to a hissing layer of distortion. This track is where the experimentation truly arrives, first in the mellow, muddled bluesy breakdown at 2:00, then later in the jarring rock riffs and curving bass-lines after 4:00.

Trust me, you've not heard anything quite like this before, and such strange hypnosis provides one of the compelling reasons that Jute Gyte deserves further examination aloft the saturated spectrum of underground darkness. Most of the tracks follow a comparable formula in that they are between 8-12 minutes in length, opening with steady rhythmic charges, but they've all got surprises in store for those who dread that ennui might set in. There are several deviations in the tonal ambiance of brief interlude "Church Not Made With Hands" or the resonant guitar instrumental "To Return and Revere the Desolate Places (Late Idyll)", but on the whole the pieces fit with a formidable, haunting balance. Verstiegenheit might require several exposures before it seeps into the listener's skin, but as usual, Kalmbach is not interested in accessibility, nor the cheap rewards of the easier road. This is impressive, important music, but it flits across the depths of the surreal and secret. It's not coming to you. You're going to have to chase it.