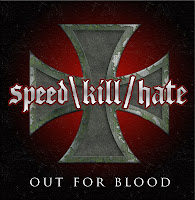 Seven years have lapsed since the Speed Kill Hate debut Acts of Insanity, an Overkill spinoff featuring the past and present alumni Dave Linsk, Tim Mallare and Derek Tailer. In all that time, the black and green attack has persisted throughout the world, continuing to spawn tours and albums, the most recent (Ironbound) opening the band up to an entire new audience and generally lauded as the best the band had released since their 80s fare. So, it's understandable that not a lot of attention could be fostered upon such a side project, but nonetheless Linsk has returned to us with a new lineup and a new album in Out for Blood. He's the only remaining member here, filling out the band with a few underground thrash luminaries: Tony Ochoa from the cult act Sindrome takes up the drum slot, and Ripping Corpse bassist Dave Bizzigotti is also on board. Lastly, there's a new vocalist in Bob Barnark, who bears some similarity to Pantera frontman Phil Anselmo in delivery, though not so much that it becomes a needless distraction.

Musically, Out for Blood is a step forward from Acts of Insanity, and album I can't claim to have enjoyed. This is a mix of brickhouse modern Overkill aggression sauteed in hints of Bay Area influence circa Testament, Defiance, Vio-Lence and Slayer. The riffs are hardly innovative, but they're still fluent and fun, with a tolerable mix of belligerent momentum ("No Remorse", "Breeding Hate", and "Slain") and fist hurling mid-paced thrashing grooves ("Behind the Mask", "Deceiver"). As I've already drawn the inevitable Pantera comparison, there are in fact a few individual tracks here that seem redolent to that Texas tornado, namely "Brotherhood of Arms" and "The Cleansing" which come at you as if they were heightened alternatives to a "Fucking Hostile". Throughout the majority of the tracks, Linsk is able to incorporate tight leads that ever escalate the urban assault, while the production is all around superb, guitars and percussion delivering repeated gut punches. You can feel the frustration and force here much like you could through a Cowboys from Hell, Eternal Nightmare or Taking Over, even if the sound isn't nearly so fresh, or the songs nearly so memorable...

Even though I'm not always crazy about the vocals, the band is keen to augment the standard slather of Barnark with added grunts, shouts, and Barnark himself equipping a bit of a sneering variation. The real issue for me here is just a mild lack of creativity all around. The cover art is entirely uninspiring, nothing more than a drab variation of the debut. The song titles are generic almost to a fault: "Written in Blood", "Breeding Hate", "No Remorse", "Behind the Mask", "Deceiver" and so on. Hardly compelling, and in fast many of these have been used countless times by other metal bands, including thrashers. This would be one thing, but the lyrics are also quite rudimentary, in the reactionary tough guy style so popular through the 90s in bands like Pissing Razors, Machine Head, etc. Granted, they're effectively angry to parallel the music, but I think a bunch of vets like this are capable of far more depth. In the end, Out for Blood is not a miserable experience, and it trumps the 2004 record. There's nothing terribly wrong with it, but neither it doesn't really offer the forward thinking or excitement that thrash is in dire need of. If you enjoyed Overkill's past few discs or the last two Onslaught albums, you might want to give it a whirl.