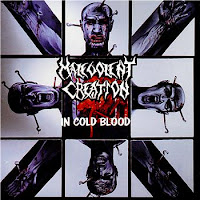 If there's one thing I admire the most about Malevolent Creation, it's the fact that they've never swerved in their efforts to deliver the most sincere brutality imaginable, for over 20 years. Granted, this very often comes at the expense of memorable songwriting, and I'd be hard pressed to distinguish the majority of their full-lengths from one another if you handed me some jumbled playlist, but apart from a few swerves towards groovier material and back again to breed a faster lethality, they've played it consistently straight and are not likely to change in this lifetime. In Cold Blood is yet another of those near featureless excursions, a self-propelled battering ram of primal musculature, but it's ultimately pretty average.

Most notable as the debut of the tireless, acclaimed skinhammer Derek Roddy to the band, and guitarist John Paul Soares (who also worked with Jason Blachowicz in Divine Empire for a spell), In Cold Blood rifles through 13 tracks in 42 minutes, the majority of which hang around the 2-3 minute mark. Caustic, explosive thrashing guitar rhythms are wound into a lattice of near death grind, as if a fusion of Deicide and Napalm Death not unlike the early works of Dying Fetus or Internal Bleeding. Fasciana and Soares jam pretty hard here across picking schemes that reek of exhaustion, but they never quite develop into hooks that remain for long in the brain. Pieces like "Violated", "Nocturnal Overlord" and "Millions" make similar impressions to a car crash fatality: fast, efficient, choked with carnage, and over within minutes once the last of the lifeblood empties the human host. However, the Floridians are also equipped with some variation in the slower grooves of the title track, or the crushing chug-thrashers "Compulsive" and "VII".

Roddy is both renowned and reviled as a mercenary of the form, yet he's nonetheless a maniac to experience on most fronts. There is certainly some value to tuning out the rather monotonous vocals of Blachowicz and the underwhelming guitars and just reveling at the sheer strength and ability this guy brings to the table. But Scott Burns also does it justice for the most part, giving these hymns the murderous eminence they deserve. In Cold Blood might just be the most focused and destructive album for Malevolent Creation at the point of its release, a band on a mission to match fist for fist with the more extreme acts of their day, an inverse of the the lockup and aging that other bands might have experienced. Unfortunately, its qualities just do not hold up to many repeated listens. The guitars unanimously filter through the ears of the listener and back into the malicious atmosphere. Its almost as if this were the blueprint for non-distinction in US death of the nineties (though the aforementioned Fetus and Bleeding performed with the same forceful ennui), another pummeling poster child for my enduring theory that brutality simply is not everything, in death metal or anywhere else.