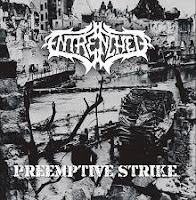 War metal has been enjoying a quiet rise through the US ranks of late. On the one hand, you've got a band like War Master which is more or less a direct tribute to the British gods Bolt Thrower, and on the other you've got Indiana's Invasion who clean up with a nice mesh of influences. New Jersey's Entrenched, too, do not associate themselves with a particular direct 'mentor', but instead offer a blend of thrashing and death/groove influences which are well suited to the ballast of their lyrical themes. I kept thinking of a hybrid of Beneath the Remains-era Sepultura thrash laden in the grim, inevitable belligerence of Bolt Thrower circa War Master/The IVth Crusade, though the vocals are clearly wrought from the Deicide or Carcass fundamentals of growling and snarling.

Sound exciting? Well, I was certainly on board for the first few moments as the battering mosh ready intro was cycled through samples of air raid sirens and artillery, and then into the almost Repulsion-like charge of "Bred to Kill". After this, I found myself waiting for the riffs. The forte seems to lie almost completely in the fresh, bloodied, loud production, the ominous guitar crunch, slicing if forgettable leads and the thunder of the drummer. I'm not saying there aren't any riffs, because that would be silly. Just that there are painfully few that stand up to be counted, and as the album wears on between stately late 80s Sepultura/Obituary deathly, brutal thrash ("Landbrecher 666"), grinding walls of simplistic force ("Burnt and Destroyed"), and even crawling Bolt Thrower or Asphyx crushers ("Anesthetic Death"), I just kept hoping they were going to break out something impressive.

The final pair of tracks ("Tooth and Nail", "Dropping the Tsar Bomb") are Preemptive Strikes most punishing, but even these failed to muster an appreciation beyond the loud and lauded, powerful mix. In this way, the band also reminds me of Hail of Bullets, only the Dutch are far better at composing patterns that stick with you alongside the weight of the audio. Entrenched have a firm knowledge of their subject, and the compositions certainly reflect their influences ability to transport the listener's mind to the theater of war. The samples are well placed and always serve to build some excitement for the metallic surge. It's honest butchery, with no real gimmicks about it. But in the end, they're just not coming up with strategies that yield any rewards for repeated listens, and I found myself drifting elsewhere, as if I had been ghosted by mortar fire mid-way through the battle.