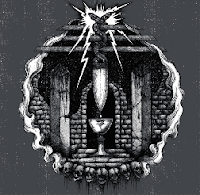 When it rains blood, it floods viscera, and such could be said for the initiative of Dark Descend records in snapping up a pair of promising Finnish elite to help usher forth the tsunami of guts inherent in the exploration of classical death metal components. Corpsessed are a bit more rugged and raw than the other acquisition, Gorephilia, and they draw more directly from their Finnish predecessors like Demigod and Demilich, though one can also distinctly hear the influence of the Swedes Entombed and Grave, and a bit of the old, pervasive Incantation depth. The Dagger & The Chalice EP is their first official output, though the members have been involved in other obscure productions prior to this.

Like a lot of the old school crop, Corpsessed open with a ghastly intro that draws the listener directly into a sluggish, subterranean mood, and they do it with tortured, funeral guitars and resonant growls that echo off the roof of melodic feedback as the drums slowly escalate into a double bass hammering. A good setup, and "Crypt Infester" follows with a slightly chaotic mesh of roiling grooves that seem an unholy collaboration of Entombed, Demilich & Disharmonic Orchestra between bursts of harrowing acceleration. It's decent, but much better are the blunt and unforgiving "Nameless Cult" or the dense, fibrous menace of "Altar of Worms". I wasn't so much into "Massgrave", I found its central, swaggering groove dull by comparison to the others, but the Finns compensate with the closer, the curious title track, ominous ambiance morphed into a grating, brutal death clamor.

Easily, this will be another band that sates the tastes of those enamored to the new wave of old. Fancy the cavernous criteria of Innumerable Forms, Evangelist, Vasaeleth, Gorephilia, Sonne Adam or any number of modern translations of the too-soon forgotten sphere that was atmospheric death in the 90s? Then I'm sure you are not going to find much disappointment with The Dagger & the Chalice. The production is immense and oppressive, the majority of the songs deliver enough dynamic punishment to never grow tired. About the only thing lacking here would be the truly memorable riffs it takes to thrust death metal into infinity, but on atmosphere alone it succeeds.