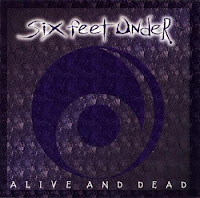 Irrespective of the general lack of excitement and quality inherent in Six Feet Under's music, they were given the royal treatment via Metal Blade Records, and as a teaser for their sophomore Warpath, they released the Alive and Dead EP in 1996. This is a basic setup for such a release, with a few non-album tracks, a cover, and various live selections. Now, all three of the studio cuts were released with the limited edition digipack of Warpath the following year. But assuming you were not one of the 'lucky few' to attain that version, the fodder presented here is at least not utter canine excrement, though there is no conceivable reason to want to spend actual money on this.

This is the same lineup and writing style as Haunted, and thus the two new studio pieces here: "Insect" and "Drowning" are your basic Obituary plodding pace with Chris Barnes' lackluster grunting affixed to rhythms. "Insect" has a bit more of a thick, doom groove to it, while the latter has a faster guitar line reminds me of a "Memories Remain", even breaking into another groove, though it's nowhere near as catchy. In truth, these songs are about level with the less memorable fare from the debut, and are easily skipped, but for what? Judas Priest's "Grinder" is flabby and lifeless in the hands of Chris and company, with no real differences from the original apart from the weak gutturals and less enthusiastic guitars. A real yawn.

So then, the entertainment factor here might be solely placed upon the shoulders of the live material, which has been culled from a few performances in Switzerland and Holland. There are four of them: "Human Target", "Beneath a Black Sky", "Suffering in Ecstasy", "Lycanthropy", all from the debut. If you enjoyed Haunted, then there's not much to complain about. The vocals bear slightly more charisma than the studio incarnations, and though the single guitar feels thin, it feels fibrous and rich like an early Obituary performance sans the stereo effect. "Human Target" is the catchiest of the quartet, but the incline in quality to the rest is not a steep one. Still, I can imagine the European audiences being underwhelmed by Barnes' new project, falling asleep or hitting up the bar while they waited for the next act, if there was one, and I hope for the audience's sake there was...