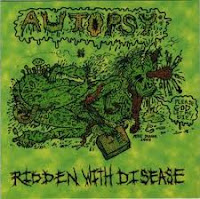 There were a number of Autopsy compilations throughout their lengthy hiatus, from several imprints, but most of these are sadly the expected wastes of money and time. If there's one noted exception, then it would be Ridden With Disease, release at the turn of the century through Necroharmonic (who did a number of these). I say this for the sole reason that this is nothing more than a collection of the legendary band's first two demos. Demos that the average fan fluent in their full-lengths and EPs of the 90s might damn well not own a copy of. Demos that such fans SHOULD want a copy of, as the rather crude death/thrash acts being committed upon them sound absolutely as pungent and bludgeoning to these ears as they ever had...

Both the 1987 demo and Critical Madness are included in their original, gut-wrenching glory. The latter is perhaps less valuable, since the contents ("Charred Remains", "Ridden With Disease" and "Critical Madness") itself were also recorded on the debut Severed Survival in 1989, and all sound better there. These original demo mixes are pretty rough around the edges, rougher at least than the first demo, which is the better of the two. You probably know the eerie, twisting track "Embalmed" which sounds nearly as eyeball popping and evil here as the ensuing studio full-length, but what of the intense, crushing barrage of "Human Genocide", which seems like a hardcore alternative to old school Death (Scream Bloody Gore). Or the Repulsion propulsion of "Stillborn", which is incredibly fucking awesome. Perhaps the worst tune on the demo was "Mauled to Death", but if you enjoy stuff like "Zombie Ritual", or the first song here "Human Genocide" then it's still worth hearing.

Added to this are a pair of live recordings of "Severed Survival" and "Service for a Vacant Coffin", and whilst neither sounds particularly impressive, there's an authentic raw appeal that trumps the Tortured Moans of Agony recordings. Now, some of the material found here is available on later compilations or bonus discs to remastered albums, but I kind of like the cover art, it suits Autopsy well, and honestly I prefer collections like this which gather up demos that I'm unlikely to ever land my fingers upon in their original format (not that I care much for tapes these days anyway). If you're a fan of their style and don't mind an even lewder and cruder glimpse into their past, then this is the one non-studio album/EP in their catalog that is worth a purchase.