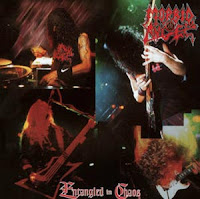 Riding such a cloud of deserved, infernal hype as they were, I was honestly surprised it took as long as it did for Morbid Angel to issue an official live recording. Entangled in Chaos was recorded during the 1996 European tour, and unfortunately it was only released in Europe itself through Earache, so those of us interested in the States were forced to either pay steep import prices or get really lucky. I was blessed to find myself in the latter category, grabbing it cheap out of a festival bin a few years after the fact. This was also pretty important at the time because it was basically the 'swan song' for bassist/vocalist David Vincent, at least until he rejoined the cult in the 21st century.

The recording benefits greatly from the Trey Azagthoth/Erik Rutan combination, pretty much the band's prime in power. The guitar mix has a coiled, fluid power to it which sounds great, with some searing flange and reverb, especially when placed so highly in the volume; what's more impressive is how the leads resonate, whether sloppy or structured, with even more character than most possessed on the studio recordings. Sandoval is just as precise a menace as a concert attendee would have hoped, and Vincent's voice sounds ominous with an extraworldly hue, much to my satisfaction. All of the musicians truly sound up a storm here, even if the bass feels mildly subdued. Tom Morris and Trey did a fine job mixing and mastering it, so you really fear like you're present at the shows.

The track list is fairly well balanced from the first four studio albums, with a slight and welcome favoritism towards Altars of Madness: "Immortal Rites", "Maze of Torment", "Lord of All Fevers and Plagues", "Chapel of Ghouls", and "Blasphemy" are all represented, with "Chapel..." and "Lord..." offering the most entertainment on the entire album. From Blessed Are the Sick they have gathered the title track and "Day of Suffering", and even though that's not my fave material by the band, they sound fitting to their environment. The Covenant selections are "Sworn to the Black", "Blood On My Hands" and "Rapture". As it was their most recent offering, it does make sense that they'd only include "Dominate" from Domination, since most consumers would be more interested in the earlier material in the stage setting.

I was a little disappointed that they didn't at least offer us "Eyes to See, Ears to Hear", being in the minority who actually really likes that album. But if you, like me, view "Blessed Are the Sick" as the spiritual precursor to "Caesar's Palace", then you'll appreciate its lumbering magnitude as an acceptable substitute. All told though, it's an understandable roster of tunes that exhibits the cult's exorbitant level of dynamic ability, and Entangled in Chaos is a successful proxy for those who had no opportunity to be there. Not necessarily a world class live recording, but certainly a function and accurate effigy of blazing hymns.