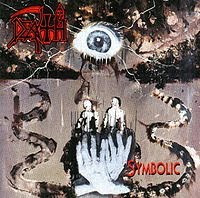 Having showed a marked improvement in the band's progressive, sophomore decade, Individual Thought Patterns was substantial enough that I took the stick out of my ass and came to terms with where Death was headed for the future: the car wash. Symbolic is the third and most potent work of this phase in Schuldiner's career, and yet its remarkable less complicated than its predecessor. In fact, I often have a difficult time describing this as a 'death metal' album whatsoever. It's more like a clinical, hard hitting thrash album with dynamic drums, savvy leads, and the development of Chuck's voice into a slightly pinched, higher range that was not exactly unexpected after hearing Human or Individual Thought Patterns.

This is honestly the least interesting of Death's efforts from a conceptual standpoint. The lyrics continue along the social and psychological strata the band had been exploring for the past half decade, further removed from the morbid ministrations of their formative gore stores. Much of the composition here is incredibly simple, but damn if it doesn't sound great on headphones or erupting out of just about any stereo I play it through. Jim Morris did a remarkable job here, as well as the mastering team. The guitars feel rich and fulfilling despite only a mild margin from those of Human, and the writing gives the Gene Hoglan plenty of room to breathe. I found myself paying attention to his kicks and fills more than almost anything else I've heard him play on. Rounding out the band this time, Schuldiner decide to go with a pair of lower profile musicians: Bobby Koelbe on the guitar and Kelly Conlon on the bass. Regardless, the duo are rather well suited into this game of musical chairs, complementary to the actions of the star percussionist and composer.

It doesn't hurt that most of the songs are quite good, with a few in particular numbering among the best of their 90s stint and arguably their career. "Without Judgement" is incredibly well plotted, with some thrashing grooves in the verse not unlike "In Human Form", surviving a wealth of variation, including the resonant, penetrating leads in the bridge. "Crystal Mountain" has a strong charging aesthetic that cedes into subdued, catchy bass lines and glittering strings of cleaner tone, with a jamming mystique to its closing moments. Closer to their work on Leprosy and Spiritual Healing, we have "1,000 Eyes"; and "Misanthrope" builds memorable momentum, with subtle and fetching chord progressions throughout the verse.

I'm not sure that the epic 8+ minute finale "Perennial Quest" is the strongest example here, as I tend to zone out through a number of the transitions; and "Symbolic" itself is not an incredibly entertaining opener for the effort, but the remainder of the songs ("Zero Tolerance", "Sacred Serenity" and "Empty Words") are all a study in polished contrasts of surgical aggression and accessible prog rock leads. To tell the truth, there are probably only a half dozen rhythms or individual guitar riffs on the entirety of Symbolic that are revelatory in quality, much less than any of the first three albums when Death were performing their more grisly fare. Hell, there are less standout riffs probably than Individual Thought Patterns. Yet the arrangements are almost unanimously excellent, balanced and all too easy to get lost in, not to mention accessible.

I will gladly bear the banner of dissent when it comes to the majority stance on Death's catalog, vastly favoring the years of Scream Bloody Gore and Leprosy to anything that has come since, because those albums created a creepy, unforgettable presence with amazingly cool riffs that simply have never been replaced in the genre that they helped birth. But there can be no doubt that the philosophical prose, progressive influence and friendlier, bring home to mom gloss of Death 2.0 was slowly ascending the ladder of quality, to peak upon Symbolic and then fall off dramatically with the anticlimactic drivel that was The Sound of Perseverance. Schuldiner was bent on expanding his work into a cross-stream that could taken be taken seriously by fans of rock, thrash, and subscribers to guitar magazines. Here was a way to do it without sacrificing quality nor intelligence. The last Death worth a damn.