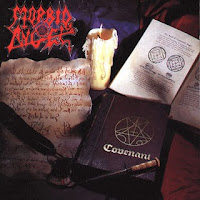 You don't get a chance to review the best-selling death metal album of all time every day. Just once is enough, and if the various arcane and mechanical procedures factoring into this selection are to be believed and up to date, that album is Covenant, the third full-length from Florida's maniacal Morbid Angel. Much like Blessed Are the Sick, this is an album I've long held to be overwrought with excess acts of fellatio from the death metal audience. It's not surprising, as it arrived in that fragile space and time when many brutal subordinates were first exploring the genre. Just in observing the raw numbers it pushed, it's rather obvious that Covenant wound up in the hands of many who had no previous contact with such extremity. But this success might also be partially attributed to the album's visibility, as it was the first of two released through the then-major (now defunct) Giant Records.

I'd also draw attention to the fact that this album is like a cheetah running the 100 yard dash against a motley band of tortoises and beached whales. It's energy might not have held out indefinitely against its shelled and blubbered competitors, but it didn't need to. One burst rush at the finish line, and we have our Gold medalist. Covenant is pretty fucking fast, enough that Pete Sandoval might have turned it into an informercial for weight loss had be been so inclined. It's perhaps not so explosive and impressive for 1993 as Reign in Blood and Darkness Descends felt in 1986, but it makes the majority of Blessed Are the Sick sound like an overnight IV drip bag. That's not to say the speed necessarily translates into quality. Like its predecessor, I had a subdued reaction to this when it was first released. There were clearly some good moments to be found throughout the 40+ available, but there are definitely a number of full tracks I feel no adverse reaction to skipping entirely, though I've felt more of a 'growing' attraction to this than the sophomore which confounds me today with its fanatical and formidable palanquin of diehard devotees.

The first impressions the album leaves are admittedly rather mixed. I was very psyched that the band had returned to the lethal ballast of Altars of Madness, and yet I found not a single riff throughout "Rapture" to reach said quality, not even the morbid weave of the messy lead. The exhaustion of Sandoval is admirable, but ultimately hollow with no good guitars affixed to it. Thankfully, "Pain Divine" compensates once the first few rhythms burst by into the solemn melodic snaking around :30, and I rather enjoy Vincent's vocals on this, which bear a ghastly countenance not unlike the early Death albums. "World of Shit (The Promised Land)" changes gears to a punishing crawl manifest through thicker bass and a swampy sequence of notes that foreshadow much of Domination and Formulas Fatal to the Flesh, but I'd attest that I like the slower segments than the faster. "The Lion's Den" has a similar flow to it, though more thrashing and concrete, while a few of the other tracks like "Vengeance in Mine" and "Blood on My Hands" have little more than wild, wretched leads to balance off their ceaseless, banal brutality.

Once you dig a little deeper, there are a few more interesting pieces in wait, like the versatile and inspiring "Sworn to the Black", my favorite song of the whole album for its steady, warlike fervor and the slice of the leads. "Angel of Disease", an early Morbid Angel tune being repressed here from their unreleased demo/debut album, is likewise curious, opening with a fairy splattered heavy metal sequence before some great grooves akin to those of the Altars of Madness era. Don't much like the vocals though. "Nar Mattaru" is a mere synthesizer sequence to herald the closer "God of Emptiness", which is yet another quality piece that serves as precursor to the following album, albeit with interesting vocals cast in a deeper, almost demonic narration that makes the listener feel as if he or she were traveling through a dimensional tear to a plane of twisted, formless horrors that will soon devour him/her.

Covenant is produced just as cleanly as Blessed Are the Sick, but there's something absorbing and unusual about its sound. Simultaneously organic and mechanical, the former through the rich and functional fabric of the guitar tone, the latter through the precision with which the band is known to perform. I'm not always able to make it through the play list without skipping at least 2-3 of the tracks, but for the most part it's a solid experience. For all its momentum, there are not as many moments of distinct atmosphere or delicious riffing as Altars of Madness, but it was clearly aimed back in that direction, and certain individual segments stand to memory in the near two decades since their conception. The lyrics are decent, flush with the concepts of the first two albums, and I also love the classical occult appeal of the cover image, which I'd consider more iconic than the music itself. Is there enough hereto justify it as the greatest seller in the whole of the genre? I think not. But at least that acclaim has been placed squarely upon the laurels of something somewhat exciting, something that doesn't suck.