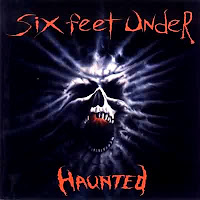 Ask yourself: have you ever speculated what Obituary might have sounded like in 1989-1994 if you supplanted John Tardy's raucous retching with Chris Barnes' blunt, nigh monotonous delivery? Well, Six Feet Under was seemingly formed to answer that question. Or maybe not. It's a bit of a drag that Barnes was unable to come to terms with the other members of Cannibal Corpse after such a good job on The Bleeding, but he was quick to land on his feet after the separation. Having already formed this as a side project before the split, Metal Blade were more than happy to keep the guy in the wings. So he hooked up with a pair of scene veterans, Allen West (Obituary) and Terry Butler (ex-Death, Massacre), in addition to drummer Greg Gall, and proceeded to forge a path of mediocrity that to this day has not ceased. How this band has managed to remain signed and productive is beyond my mortal ken, but fuck...if ICP can persist, why not SFU?

That said, Haunted is the least offensive album in the band's nearly 20-year career, because of one important fact: it sounds like prime-era Obituary (1989-1994). West might not have been present for Cause of Death, but the riffs here aim at the same general hooking simplicity. In fact, I'll admit that the riffs are better than those found amid the redundant complacency of The End Complete, and pretty close in quality to World Demise. Generally, there is not a song on this debut that generates more than a single worthwhile guitar line, but sometimes that is enough to at least get the listener's head bobbing to the groove. Barnes himself sounds rather dried up here, and the punctuation of his vocals rarely memorable, but a few of the tunes like "Human Target" and "Silent Violence" are fun enough that he gets a pass. What's more interesting is how Six Feet Under employs simple, steady rock beats rather than the exhaustive power that the rest of the field were soaking up. There is some double bass in there, but overall it's quite a contrast to most death metal outside of a few peers (Obituary, some Bolt Thrower maybe).

Unfortunately, that fact does little to absolve the album of its general mediocrity, and most of the songs flow together all too well, muddled in the memory and devoid of individual distinction. I'm likely not exaggerating when I assume that West and Barnes wrote this material in an afternoon or two, because it's stubbornly simple to the point that it no longer a virtue. The lyrics consist of more thoughtful if forgettable prose than one might expect, not so gore drenched as what Barnes was belching forth in his years with Cannibal Corpse. The Scott Burns mix is alright, not one of his best but certainly not one of the worst. Overall, there was room in the market for a project like this, and Haunted is functional enough for those who can check out their brain to enjoy some carnal, crushing momentum delivered with passable effort. Is it better than anything Chris Barnes OR his replacement Corpsegrinder recorded with Corpse? Outside of the middling sophomore Butchered at Birth, I'd have to say that the answer is a resounding no, so it's not at all a surprise that many fans of The Bleeding were repulsed by this. I'll hang on to my own personal distaste for some of the later SFU recordings.