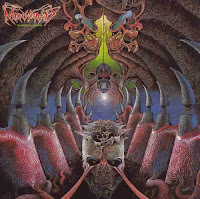 As much as I do enjoy their debut Imperial Doom, I've got to admit that Monstrosity were one of the first Florida death metal artists to come along without a distinct identity unto themselves. Formed in 1990, several years after many of their peers were assembled, the sound on offer here was a middle ground between Morbid Angel, Deicide, Malevolent Creation and Nocturnus, with perhaps a sliver of overseas influence via Pestilence. That said, what they might have lacked in originality they would compensate for with tight writing, technical ability, intriguing Dan Seagrave cover art, and a professional mix courtesy of Tom Morris at Morrisound. While this is certainly not the most memorable efforts in the genre's formative years, it holds up rather well in comparison to much of this band's discography.

Yes, this was the album that would introduce us to the blunt and brutal vocals of 'Corpsegrinder', George Fisher, who would go on to much larger success replacing Chris Barnes in Cannibal Corpse. You get a pretty good idea of his percussive, battering ram style here, set perfectly against the instruments, but the real spotlight falls upon the work of guitarists Jason Gobel and John Rubin; and the thundering footwork of Lee Harrison, yet another drummer to prove he could run alongside the bigger names (Lombardo, Hoglan, Sandoval). The riffs here, while often lacking immortal or amazing patterns, are constantly churning and broiling along with a good deal of choppy variation and skill, to provide the audience with 35 minutes of entertainment that would undoubtedly thrill fans of Blessed Are the Sick, Legion, and The Key, not to mention the then budding Cannibal Corpse themselves, who were in effect quite cruder than what is on display through this debut.

Imperial Doom does lack for some of the character that most of the other Florida bands were exuding through individual tracks. There is no "Body Bag", "Chapel of Ghouls", "Pull the Plug" or anything like that, but it's incredibly consistent, and the band instantly goes for the throat to prove what they're all about, with a title track that scales from a bull rush of an intro to a furious blast beat broken down into winding, juggernaut rhythms and later a slower, morbid drawl. They continue to pace themselves well through "Definitive Inquisition", "Immense Malignancy" and "Vicious Mental Thirst", all of which exhibit considerable effort, taut and effective leads and a literal barrage of what could then be considered technical structure. There is often a primitive, underlying pattern of start/stop which doesn't always create worthy transitions as the band are storming from one of the myriad guitar patterns to the next, but I can't think of a full moment here which evokes anything resembling exhaustion or ennui.

In fact, though I've enjoyed a few of their albums since this one, I would have to hold this as the pinnacle of quality and functionality throughout their career. Corpsegrinder has put out some better performances through Cannibal Corpse, but I did prefer his style to Monstrosity's later front men like Jason Avery (not that they were at all ineffective). Imperial Doom is not a first rate offering, but it stands alongside Malevolent Creation's The Ten Commandments as one of the more reliable second stringers of the period, losing little to none of its aggression and abrasion throughout the decades since. Concentrated, concise brutality with well spun lyrics, this was certainly a rock solid addition to Nuclear Blast's early catalog, and a band that could have easily competed in the big leagues with some slightly more memorable songwriting.