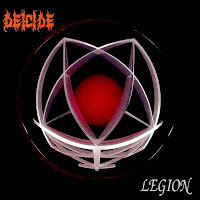 It's always felt to me like Deicide and Legion were one single, longer album sliced down the middle and released as two disparate products, but in the end it is the sophomore which wound up with the better 'looks', without sacrificing any of the debut's muscle. The line up is the same, the production is the same (another Scott Burns joint) if slightly dusted off, they've once again aimed for a simplistic cover icon, and the technical execution, while marginally more involved and brutal, is also quite level with that 1990 ritual. This is quite a beloved album at large, and with so much going for it, it's not difficult to ascertain why: Deicide were transitioning into one of the most brutal, infamous runts in the entire Floridian litter, and they offered a reliable level of blasphemous release for an audience that wanted to pound their own fucking skulls in.

Is it truly such a tremendous album as the Hellish trumpets of fanfare would have us believe? Absolutely not. The songs are nowhere near as distinct as those you'll hear on an Altars of Madness, Leprosy, Cause of Death...not even The Bleeding. But for all its brevity (the album is less than 30 minutes in length), there is an entertaining quality here that has remained a permanent fixture from the year of its inception to the present. Legion has grown no better nor worse for its age, and this is attributed to the level of sheer punishment being meted out by Benton, Asheim and the Hoffmans. Acrobatic, driven riffing is accented by Steve's jaw dropping double bass, Benton's layered grunts and malice, and the guitars feel slightly more clinical and more interesting to explore than any from the s/t.

I'd also point out that this album, despite a lack of substantial replay value, joins its predecessor as a template for this end of the genre. Even I, who am not the most devout follower of this record or its creators, think back to this just about every time I hear one of the thousands of younger acts that populate brands like United Guttural, Amputated Vein, Sevared, Unique Leader, and so forth. It's a potent effort, and it's an important one. Outside of the later Stench of Redemption, an unexpected surprise with its two new (if seasoned) guitar players, I would have to say that Legion is the band's best. Catchy this is not, but it's difficult to not get absorbed once the precision pummeling has begun. The beating continues much as it started, but this time they've sharpened their knives and weighted their bludgeons.

Love the creepy intro to "Satan Spawn, the Caco Daemon", and the ensuing calamity is such that it simply will not let the conscience rest: the surgical chugging of the Hoffmans and the Asheim vortex being straddled like a roller coaster by Benton's frenzied if somewhat goofy vocal patterns. A mock rodeo being televised from the Abyss. "Dead but Dreaming" and "Repent to Die" are slightly less bewildering, but their concentrated slamming sequences splay out and prostrate the listeners, subduing all to its formidable feats of bone shattering. Beyond this point, the album doesn't ever come up for breath, songs like "Holy Deception", "In Hell I Burn" and "Revocate the Agitator" effective in their ungodly brutality, if not incredibly distinct or visionary. Often, the vocals are quite hilarious, like the punchy perforation Benton lets fly throughout the climax of "Revocate..."

The issue haunting this sophomore is the same that troubles many such would-be legends in the brutal death arena: lack of subtlety, mesmerizing notation and structural strength that makes me want to replay it again, again, and after that, again. Some fans of this style care nothing other than living in the moment, or rather, having their ass pulverized within that minute. Next week, or maybe next year, or maybe next decade, they'll have moved on to 50 Cent and Jay-Z, with Legion and its peers having served their purpose during the trials & tribulations of adolescence. Ma and pa were shocked, detention has been served, and the forehead has been ground to a pulp of marrow and sawdust. But for someone like myself, death metal was just the next natural stage in the evolution of a musical form that had existed for decades. In no way should its classics be exempt from higher standards of songwriting, despite the short attention spans of the genre tourists and 'purists'.

Deicide's Legion is punishing and good enough for what it represents. I like it. Both the lyrics and music have something to offer. Yet, none to the material leaps into memory the instant I demand to hear a great death metal track, and it does often suffer from a sameness, a redundancy of content that is not compelling enough for me to shake.