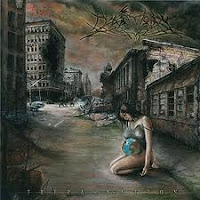 You might not think it, but Slovakia has long been a hotbed for death metal, particularly the brutal variety. Alright, perhaps not a hotbed, but at least a lukewarm futon, producing decent acts known by the names of Craniotomy, Erytrosy, Pervserity and so forth. One of the latest to bear the -y suffix with pride is Diftery, who released a debut (Corrupting the Evolution) through Grodhaisn. They return five years later through Amputated Vein with their sophomore Trepa-Nation, a virtual annex of just about any descriptor you could possibly hope for from modern death: brutal, slamming chug force offset by intense explosions of speed, proficient arpeggios and lead work and grunted vocals. Diftery also forsakes a lot of the expected, gory lyrics to focus on dystopian social issues.

Tone-wise, this sophomore is notably more controlled than its predecessor. Corrupting the Evolution's charms were limited to the typical squealing and moshing, perhaps, but it had this enormous sound to it like you were having corpses shoveled upon you by unfeeling construction equipment. Trepa-Nation, by comparison, is very clean and tidy sounding, which is beneficial to those straining to hear the band's myriad leads, but definitely dials down the overall crushing effect that one might have been looking forward to. That said, there is simply so much going on here that you have no choice but to listen through a few times. Particular standouts include "Earthfall" with its wiry, winding cleans that burst into punishing streams of muted discord, or "Aeon of Slavery" which in my opinion bears the lion share of the better riffs on the album, often sounding like Death's progressive 90s era material delivered at hyper pace with methodic but effective sledgehammer grunt vocals. "Legacy of the Fallen Race" is likewise impressive.

Alas, there are some songs here which simply don't meet muster, like the slamming but soon forgotten "Apophis (Sensations of Absolute Power)" or most of the first half of the album. Surely, most of the compositions contain at least a few good ideas, and Diftery execute them with the effortless precision of professionals who can play technically close to the level of almost anyone else in the death metal field. The real issue, though, is that no matter how fluid the band seems, it all feels like pre-trampled terrain, a union of Necrophagist, Deeds of Flesh, Cryptopsy and other bands who arguably pioneered some of the genres presently enduring tropes. As a result, I didn't get much out of this album aside from a thorough beating and a handful of riffs that I wanted to revisit. These Slovakians are beyond competent, but Trepa-Nation has been built only for those seeking the ceaseless acrobatics and technical impressions of unrest.