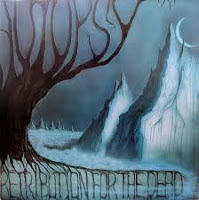 Most will have likely experienced the Retribution for the Dead EP on one of several CD issues of the Autopsy debut Severed Survival, but it was actually quite a ghastly and sufficient filler between the band's first pair of albums. Here, Chris Reifert and company pursue more of a direct death/doom hybrid, not at all an unexpected deviation from the slower breakdowns present on Severed Survival, and simultaneously setting up the caveman atmosphere of their superb sophomore album. I'd also mention that I love the cover art to this EP, more so than anything else the band have ever released. I almost wish the band had pursued further aesthetics like this on subsequent output.

There are three songs here, each a sordid amalgamation of Autopsy's barbaric death and doom motifs that feel like slow motion beatings with a toothed, blood encrusted cudgel. "Retribution for the Dead" opens with a glaze of pure Sabbath, then a forceful sludge as Reifert's vocals take a spin further away from the Schuldiner-like growling prevalent on Severed Survival, towards a more hoarse and unkempt tone of tortured despair. Around 1:45 the song adopts a dour, melodic drudge akin to Paradise Lost via Lost Paradise, a natural Peaceville connection. "Destined to Fester" gathers a comparable gloom before the war toms interrupt, then a wailing guitar line is affixed to the central, slug-like chords, almost like Grief jamming with Trouble. Speaking of the latter, the third and final "In the Grip of Winter" opens with swagger grooves before devolving into a mire of slow, muted chugs, then back to even more intense groove cycles. Gotta love the vocals on this one, and it serves as another glimpse into the future (i.e. Abscess). The cleaner, doomed guitar breakdown that leads into the final, bluesy excess is also quite good.

My taste in Autopsy is largely confined to the 1989-1992 period, and Retribution for the Dead is just another reason why. Like most of their releases, the guitars are never all that creative or exhilarating, instead relying on tried and tested patterns but delivering them with crippling, raw authenticity. The Californians have never shied away from their death/doom girth, traces were evident on the debut and certainly on its successor, but regardless this EP seems to offer a foul window into what might have been had the band chased this dragon on a narrower path. The tracks are morbid and swallow all hope, the lyrics retaining their primitive necrotic obsession. In the end, its one of my favorite recordings from the band, whether or not its been relegated to footnote status over the long term.