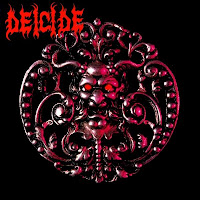 Deicide have long been the provocateurs of the death metal genre, riding and reaping the whirlwind of controversy that seems to cling to frontman/bassist Glen Benton like flies to the spoor and entrails of a sacrificial goat. From the very name of the band itself to the crude and blasphemous content of the lyrics, they feel as if they were built from the ground up to piss off the clergy, the censorship committee, and most importantly your Mom. To that extent, I've ever deigned to associate a 'bully' characteristic to their career, because I find a lot more muscle than merit through their sound. Deicide is like that tough and smelly kid from your neighborhood, that none of your friends invited to the picnic at the playground, but showed up anyway. You offer him a sandwich and a cola, because if you don't he'll kick your ass six ways to Satan, but he's not one for innocent games or quality conversation.

That trait aside, Glen Benton, Steve Asheim and the Hoffmans are neither excessively stupid or pedestrian as the analogy might infer. There is a particular aesthetic appeal to their 1990 debut which is difficult to deny. For one, the cover art is fantastic, a gleaming emblem of antiquity with glowing eyes that announce Bedlam to all those who gaze upon them, about as iconic as you can get during the formative years of the emergent genre. For another, the lyrics seem to hit all the right notes to cull the seething masses of rebels that would flock to such extremity. Serial killer Charles Manson is paid a minimalist homage through "Lunatic of God's Creation". Necromantic redemption manifest through "Dead By Dawn". The Crucifixion lampooned through the band's namesake "Deicide". Egyptian death magic given a wink through "Blasphererion". Not all of the concepts are necessarily novel or all that shocking; we had Slayer and Venom well in advance of this, but in the hands of the Floridian thugs they seem to receive a flesh layer of blood paint.

As for the composition, I was never quite convinced that Deicide were bringing to the table nearly as much as a Death or Morbid Angel. The duality of the grunts and snarls was novel if you hadn't been exposed to Carcass, and to be fair, they're often used here as the rule rather than the exception, to conjure the effect that this was a vocalist possessed of his occult convictions. Also, there is a peculiar punctuality to how the vocal lines are affixed to the rhythm undertow, an almost poetic hammer pounding ingratiated to the percussion itself. Deicide is an album of variation, mute-juggernaut mosh hymns enshrouded in blast work and frenetic if empty headed leads. Asheim was one of the better skinbashers of the scene, with strength of joints comparable to Pete Sandoval, if not the same unbridled speed. He's all over this album, and it is this performance, in addition to the chugging crunch of the Hoffman's that mark this debut as more influential than it might have had any right to be.

Here, there are few truly memorable components as far as individual guitar lines or transitions go, but the overall effect is one of unhinged barbarism conducive to a blood swilling lust for evil, and more importantly, a potent and incessant headbanging. "Lunatic of God's Creation" and "Sacrificial Suicide" make for a compelling one-two punch sequence, carnal brutality overflowing the steady drum battery through the sloven hostility of the vocals; and "Oblivious to Evil" has a curious swagger to its mid-paced verses, once again the lyrics following very closely to the pattern of the drums and guitar. Other standouts include the compressed, volatile thrashing force of "Deicide" itself; the ritual acrobatics of "Day of Darkness"; and the early Pestilence like flow of "Carnage in the Temple of the Damned" with its spike of solo chaos superior in my ears to any of the others.

Despite its strengths, Deicide is not, alas, one of my favorite cult death metal albums. Not even close. The individual tracks are consistent enough as a template for about 12,000 unspirited brutal death metal discs to follow, and no effort was spared in their construction, but there are painfully few, if any moments of meticulously calculated evil. Whereas a "Pull the Plug", "Chapel of Ghouls" or even "Memories Remain" would breathe a notorious aura of tangible horror, this is more an act of brute, overt strength. It has no subtlety whatsoever. The 'bully' again, stuffing that sandwich straight down your throat if he's not happy with the condiments. Scott Morris' murky but beef strewn mix here is perhaps my least favorite in the entire initial wave of Sunshine State slaughter; not terrible, but the bass hovers like dulled machine gun fire on the edge of perception, sauced over by the abysmal, too processed ministrations of the guitar tone.

All of these flaws will more or less see correction through the roller coaster track of the band's future discography. But here, fresh on the murder scene, the first of this killing spree, they drag against the musical and lyrical content. Decent. Unremarkable. It's ultimately a brutal but soulless surge, and while there seems to be a division among death metal fans as to which component is more important to the form, songwriting vs. sheer extremity and technical ability, I'd rather not choose sides: I desire both of these things. Deicide is focused far more on the latter than the former, more of muscle than malevolence. And though it's a potent enough establishing shot for the diabolic melodrama of the band's incendiary, infamous career, the black and sanguine ripples of its wake are more poignant than the source.