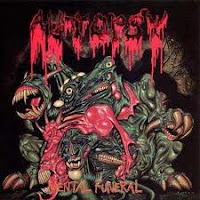 Anthropological, metallurgical studies can often reveal interesting traits that slipped through my attention, and one of these is to observe trends within particular movements and scenes. To that extent, I have to credit Californians Autopsy for their predilection towards some of the most lewd, disgusting death metal in history, well in advance of the present tendencies. Here in the 21st century, it's become 'cool' again to delve into the primitive extremity minus the technical wizardry in which the 'other half' live, but Chris Reifert and his troupe had already decided on this path 20 years ago to date. Mental Funeral leans in a wholly opposite direction to artists like Pestilence or Death, whose goals were to transcend the brutality of their roots, or transport them on a generational starship into the unknown.

Both were noble enough ambitions, and Autopsy clearly succeeded in their own. Mental Funeral is a grisly incantation of carnal death and doom that marks the pinnacle of their career, and while it's perhaps not the most perfect of albums I've heard, it's consistent with the debut while at the same time surpassing it. Once again, the guitar tone is incredible, feeling as if it was hewn from the same wood as the axe of a murderous hillbilly psychopath, full of painful grains that churn beautifully against the organic flow of the percussion, but also taut in the execution of the groovy, verminous leads. Just as much of a case could be made for Mental Funeral as a doom metal classic as death, because a large portion of the material crawls along like a convocation of Pentagram, Black Sabbath and old school Paradise Lost. As I mentioned, this is in no way an 'evolution' of Autopsy's sound, but in fact a devolution, as if the band couldn't get enough grave soil and thus decided to dig a cemetery within another cemetery.

But they also evoke a fair share of variation throughout the track list that ensures the primacy of the material will never bore the listener. Personally, I was not a huge fan of the three shorter vignettes here. "Bonesaw" is a brutal burst that would have been better manufactured into a full-length track. "Mental Funeral" itself a haunting outro with some clean guitars, that also would have been appreciated were it expanded. "Fleshcrawl" is another instrumental doom guitar sequence that serves as a decent intro for "Torn from the Womb", but independently it's not the bees knees. That said, the core songs here are almost without exception incredible. "Twisted Mass of Burnt Decay" is a writhing, hardcore/death pounder in the vein of Sweden's Entombed, while "In the Grip of Winter" expands upon the doom and groove of the previous year's EP Retribution for the Dead, possessed of some evil, repulsive morbidity to die for. This aesthetic is actually taken one further with "Hole in the Head", one of my favorite Autopsy tracks hand down for its swaggering, restless melodies.

Elsewhere we find the drudging monstrosity that is "Slaughterday", with Reifert flexing his lungs in resonant patterns of true disgust. "Destined to Fester" is another of the band's timeless and catchy death/doom pieces, with a lot of groove to it that creates a dire and welcome mirror to the eminent, emerging grunge and doom scenes of the 90s. "Dark Crusade" is a straight rager not unlike "Twisted Mass...", with incredibly churning and thick guitar tones that alternate between a grinding, d-beat momentum and neanderthal breakdowns. "Dead" might as well be a mere instrumental for all the few vocal lines we are granted, but it's another slow, methodic crusher. About the only song I don't drool over here is "Robbing the Grave". The vocals are in fact exceptional, but despite the hypnotic drum beat, I just found the guitar riffs here to be overall lacking. That said, it does not cock up the overall experience.

Once again, we've got an album that has transformed into a virtual recycling bin of ideas. I must hear half a dozen demos and albums each week from younger artists trying to pull this off. Not that Mental Funeral is necessarily innovative on its own, but the grimy production was quite a novelty in its day. Stylistically, Autopsy were heavily favoring their doom forefathers, but they were also starting to distinguish themselves here from bands like Death and Obituary which were comparable to the debut Severed Survival. Sure, you'll still hear parallels in this, but they are marginal at best. Again, this is not a band whose albums melt my flesh off like various other fundamental classics. I don't admire the songwriting quite so much as a Left Hand Path, Cause of Death, Realm of Chaos, Leprosy, Consuming Impulse or Altars of Madness. But regardless, this is a band who produced a block of brutally reliable output when the genre was at its most fresh and inviting, and Mental Funeral belongs in any exhumation of classic ideas. Whenever I'm seeking out an effective, sepulchral atmosphere in death metal, I know just where to find it.