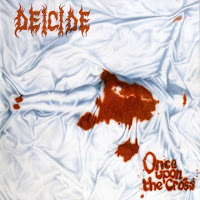 With a pair of well regarded albums behind them, a front man who basked in the controversy surrounding his shocking statements and persona, the survival of a half assed bomb threat in Sweden, the persistent forehead branding, and the continued relationship with Roadrunner Records (who were now signing nu-metal bands to rake in elevated profits) the stage was set for Deicide to explode upon the release of their third full-length. Well, that's not exactly what happened, and we wound up with Once Upon the Cross, an album that played it fairly close to the bullet belt, about as 'safe' as these infernal Floridians could possibly produce without abandoning the brutality that sat them securely about the throne of infamy among the heavily saturated US death metal scene.

Not to say that this is any way a disappointment, because it's a solid effort I'd squarely place between Deicide and Legion in overall quality. For the third time, they went with Scott Burns to record and mix the album, and in all I'd say he did a better job than the first two. The guitars have a thicker, more pulverizing tone to them, and the leads feel more flush with the rhythms when they burst upon the scene. Benton's lower pitched vocals sound a lot better here, very often extracted from the snarling accompaniment, and its effective enough when he's using these exclusively (through much of the title track, for instance). It was interesting to see that Steve Asheim considers this one of their slowest albums, and that the band performs all the material at a higher tempo in the live setting, but I didn't ever feel that it was dragging its cloven hooves along: you still get the expected alternation of semi-technical chugging and accelerated bursts of intensity from Legion.

The key is of course in the songwriting, and, well, it's just another Deicide album. Entertaining, competent and punishing enough to mash your brains in against the nearest hard surface, but it never really impresses upon the memory banks. For one thing, a band focused on such an 'evil' persona and obvious blasphemy against a Christian majority falls remarkably short of writing anything atmospheric or remotely haunting. This is not some subtle, seductive serpent that slips its tongue into your lobes, promising the manifestation of your many pleasures; but instead a spiny abyssal behemoth off its meds, flailing about and stomping everything in its half way Hell house. "Once Upon a Cross" has a moment in which Benton belches out some even more lower pitched vocals than usual, and there are some tight thrashing executions in "Behind the Light Thou Shall Rise", "Christ Denied" and "Trick or Betrayed", but a couple William Defoe samples from The Last Temptation of Christ hardly qualifies this as some astute work of villainy.

That aside, Once Upon the Cross is undoubtedly a concrete effort which serves as another gut wrenching template for hundreds upon hundreds of brutal death metal clones without an inkling of creativity, who turns towards Deicide, Venom and Slayer for their lyrical aspirations. I can remember enjoying this quite a lot when it first released, even moreso than Legion, but through the years it's settled in my estimations like a pulpy, flesh sediment in a thick cocktail of blood. As far as reliability, it's worth a spin here or there if you just want some professional punishment, solid performances all around, and unswerving castigation of the clergy, but almost all of its constituent tracks fail to evoke 'the riff', or 'that riff', if you're picking up what I'm putting down.