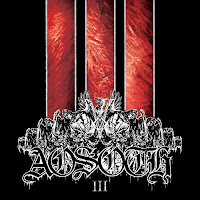 Almost in a parallel opposition to popular French countrymen Deathspell Omega and Blut Aus Nord, Aosoth commit some of the most unabashed and brutal atrocities in modern black metal. However, like those acts, they are wholly endowed with the ability to concoct a harrowing atmosphere. Here upon Aosoth III, they have done so, with an album so massively produced and hostile that all the seraphim who experience it have no choice but to beat their wings or lose them through a swift, infernal devolution. But with this new album, the Frenchmen also draw comparisons to the current crop of highly cavernous, retrograde death metal acts that are populating the sub cellars and sepulchers of the underground: delivered through the impossible, thick resonance of their doom-driven guitar tone.

III is divided up into six Roman numeric titles, a practice which is confessedly growing tired the more I see it, as it serves only to leech distinction from its each constituent track. However, this is a minor annoyance, because this is not exactly the sort of experience you want to half-ass and split into components. The entire affair is a vaunted fright fest of clamor and chaos, a hybrid of drudging semantics that do not eschew some degree of creativity. Example: track "II" at around 1:10, where the monolithic discourse is interwoven with a limb of insectoid dissonance below a faint, screaming choir-like synthesizer and slowly escalating chords. "III" begins with the low thrum of piano strikes and noisy gravitas before a steady succession of battering double bass and the thick miasma of chords. "IV" represents a sparse, jangling evil construed through the debris of a landscape which no divine light has ever shone itself; while "VI" streams through alternating abyssal winds of terrible force and pensive, withdrawn regrets.

This is about 45 minutes all told, with various pieces running from 6-9 minutes in length, but trust me when I advise that you'll want to clear your calendar for the whole conflagration. I won't call Aosoth III subtle, because there's not much hidden in the background. All of its teetering layers of ambiance are rather direct, separated only by their disparate volume in the mix, but its highly effective at destroying your afternoon. I found both of the band's prior full-lengths to be passable, in particular Ashes of Angels, but this is easily a more consistent experience for those seeking to immerse themselves in a most dire realization of their surroundings, a window that cuts through the pleasantries of mundane being to reveal the appalling, parasitic subtext of all Creation. Had Aosoth included a spade and coffin with this record, I might never be writing to you again. Your loss, I'm sure. The stakes have been raised, and they're ready to welcome our unsuspecting, human husks.