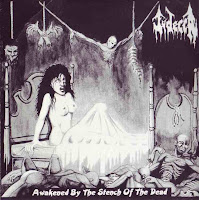 1993 must have been a busy year for Judecca, because not only did they have their previous demo content released with the Scenes of an Obscure Death EP, but also this shorter work featuring three new songs. The difference in the production here is huge, with the Florida cult coming in closer to their more mainstream peers. There's not a large shift in the dark, brooding guitar tone, but the drums are loud, present, and vastly more powerful than the tin and wan weakness of the demos. Some of the charm of their crude atmosphere may actually be lost here, but through the 10 minutes, Judecca craft a reasonably varied array that straddles both the death and doom genres.

Strangely, Awakened by the Stench of the Dead opens with its most brutal, chugging and brief piece in "Forensic Pathology". Just under two minutes of brute force in the vein of Deicide, Bolt Thrower and Suffocation, with a bit of squealing and rampant, mid-paced double bass. The vocals are rather resonant here, about the hugest aspect of their sound, and it's fun enough to listen though it might feel derivative and soulless due to its lack of a compelling central riff. "The Black Blood of Christ" is over twice the length, with some samples of wind and banal acoustic guitars heralding the chugging death/doom sequences. Once more, the huge vocals are pretty good, as well as the spooky narrative part in the bridge; but despite casting an efficient gloom, the composition is not that thrilling. "Evil Born" falls between the other two, a bouncing, simplistic rhythm bursting on after the baby sample, then picking up to a straight, brutal thrash riff with double bass.

Clearly this was a Judecca more equipped to compete with their peers in the underground, yet the band still lacked a lot of the character of the more famous acts like Death, Morbid Angel, Cannibal Corpse, Deicide, and so forth. Thus it's not much of a surprise that they remained in the grasp of obscurity with no real hope of escape. That said, this isn't all bad, and those who lack demanding tastes and simply want an imminently dark, slow face crushing are not turned away by the admittedly slim content of this.