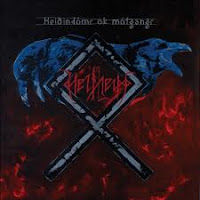 Although their end products might bear a only passing resemblance, I've always likened the progression of Helheim to that of their countrymen Enslaved. Unafraid to evolve themselves into varied configurations, but somehow managing to retain the razor disposition of their early works (Jormundgand and Av Norrøn Ætt), these Norsemen explore sound with absolutely no concern for the whining of a reactive audience. Chances are, if you're still on board with the band after 15 years, you're expecting some mild transformation through each of their full-lengths, and Heiðindómr ok mótgang, their 7th, is no exception to this, evenly distributing its creativity through passages of strained beauty and primordial strength.

The tones manifest here are consistently voracious, with an inherent depth delivered through the searing distortion of the guitars, charismatic and percussive rasp of H'grimnir and hard, steady drumming of Hrymr. Helheim never shies away from eccentricity, and in the very first track here, "Viten og Mot (Sindhiget)" we're treated to some blaring horn synthesis and wild effects over the lead sequence, which transcends the listener beyond the mere atmospheric black metal scriptures. Songs like "Dualitet og Ulver" channel a more measured, overarching melody which creates a beautiful desperation despite its predictability, and "Viten og Mort (Stolthet)" marries brooding clean chant vocals, narrative passages and crashing, wave-like rhythms to a hypnotic success rarely heard outside Enslaved. What's more, Heiðindómr ok mótgangr never really lets up: there are great tracks throughout the entire playlist, including the ghastly mid paced driver "Maðr", the somber escalation of "Element", and thundering tectonics of "Viten og mot (Bevissthet)" with their periods of strange calm.

If you're noticing a trend in several of the song titles, that's because the album follows a loose concept of Odinist captions that inspire the listener to meet their enemies at full strength. A motivational speech from one of Asgard's finest, if you will. An interesting idea, and one delivered without the pomp you'd expect from a shallower artist like Manowar. What I really loved about this album is how strangely loyal it is to the band's roots, despite the years of embellishments in production and variation that the band pursue here. It's not an entirely perfect work, as there are a few moments where the repetition or raw composition trail off in quality, but on the whole I'd feel safe in describing this as one of Helheim's strongest to date, superior even to a number of their cult classics. Recommended to fans of Enslaved, (earlier) Borknagar, and Burzum, but that almost goes without saying.