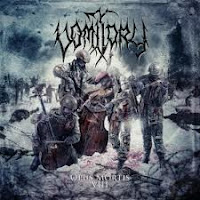 It must be great to be Vomitory, doing pretty much the same thing year in and year out and managing somehow never to date yourself or sink into irrelevance. Of course, this is pure Swedish death metal of the old 90s variety, a sub-genre which is currently experiencing an indisputable overload of new talents and stinkers, yet these specific gentlemen are one of the originals, even if their debut arrived later than their more infamous peers (Raped in Their Own Blood, 1996). Opus Mortis VIII is yet another puerile pummeling in the vein of Dismember, Entombed, and so forth, with that added fresh paint of blood and velocity that they have become synonymous with, and while I can't cite it as one of their strongest, it delivers at least the neck wrenching you expect.

That said, it took a few tracks here before I jumped on board the entrails express. "Regorge in the Morgue" is a standard, fist pumping d-beat with acceleration into blasted territory, and the ensuing "Bloodstained" a mid-paced, effective blunt instrument, but not until "They Will Burn" did I find myself back in the saddle. A hooky thrasher with lower pitched growls than usual, almost like a mixture of mid to late 80s Slayer and old Unleashed. "The Dead Awaken" follows suit with another great thrash riff bisected with old school, writhing death. Beyond this chunk of carnage, the material becomes a bit less balanced in quality. "Hate in a Time of War" seems to offer something different through its tranquil, clean guitar into, but the thick grooves are not so exciting. "Torturous Ingenious" and "Forever Damned" tear shit up as if they were outtakes from the band's unsung classics like Revelation Nausea or Carnage Euphoria; "Shrouded in Darkness" has a classic Morbid Angel lurch to it which is sweet; yet others like "Requiem for the Fallen" and "Combat Psychosis" offer about one decent riff and not much else.

Opus Mortis VIII does suffer a little from the been there, done that syndrome, especially since its artisans have delivered far more punishing, diabolic efforts in the past, but its by no means a bad album for those dead set on the genre's purist virtues. Like any satisfactory horror film, you will not experience any skimping of the gore elements, nor any reduction in the band's violent propulsion. However, there are precious few riffs here that make you want to strap a lawnmower to your chest and tunnel through the dead OR the living, and it's unlikely that this will offer an increased appeal beyond the core audience with cannibalistic, unswerving loyalty. If you are seeking out Vomitory for the first time, then I'd much more recommend you experience the beautiful atrocities that are Revelation Nausea and Primal Massacre. If not, then this is another day at the butcher block. Meat in steady supply for all carnivores, but you must supply your own seasoning.