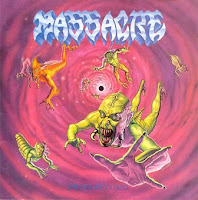 If the line-up for this album reads like an early Death V.I.P. party, that's because it was. Bill Andrews, Kam Lee, Terry Butler and Rick Rozz all had a stake in Chuck Schuldiner's beautiful beast throughout its formative years, though Massacre was also around for a roughly equal period, once home court to Obituary's Allen West. For Andrews, Butler and Rozz, the time in Death involved some touring and studio appearances on the first three, and best albums. For Lee, the connection was somewhat more distant, but undeniable: he had contributed some drums and vocals to the earlier Death demos, and like Rick, was an alumni of its precursor Mantas. So, it is not a stretch to assume that From Beyond, snapped up during the Florida feeding frenzy at the dawn of the 90s, is going to sound a whole like that alma mater.

To Massacre's credit, they never seemed to be a complete or directly obvious knockoff. There's a sizable influence here from prototypical death/black/thrash act Celtic Frost, and the vocals seem to have a more direct correlation with Chris Barnes' grunting or Glen Benton's manic snips and snarls. There are certainly some similar riffs to what you'd find on Scream Bloody Gore or Leprosy (for example, "Cryptic Realms" seems to channel a bit of "Born Dead"), and they've even included a version of "Corpse Grinder", so it's not as if they're hiding their appreciation for their previous work. In fact, you might say that Massacre was a continuation of the values that Death had begun to abandon with Human: grisly, morbid old death metal with the inspiration of horror in the lyrics rather than the social and scientific relevance Chuck had begun to flirt with on Spiritual Healing. Unfortunately, while its a passable effort, From Beyond has a little too much of a 'me too' vibe underpinning it in general, and one wonders if the band would have ever secured a deal for itself without its associations.

Once your eyes have peeled away from the terror of its pink vortex of clouds and corny looking Creature Feature abominations, the album greets you with a promising atmosphere of doomed chords and synthesizers reminiscent of Helloween's "Halloween" intro, steadily escalating into a warlike momentum over which the Deicide styled vocals explode. Lee likes to add grunts and growls over the ensuing sear of Rozz's guitar lines, which at admittedly a bit silly, only because they're not used consistently enough to create a concussion of their own. Unfortunately, while as authentic as your going to hear for early Florida death, the track never establishes itself with a decent, memorable guitar hook. This is a problem that the band repeats numerous times across the eight originals: "Symbolic Immortality", "Succubus", and "Biohazard" are all frustrating in that they deliver the energy of well conditioned thrash and death but never hook you (the first channeling "Disposable Heroes" in the later bridge, the last sounding like a mix of Pestilence with Death breakdowns).

There are, however, a few more atmospheric pieces on this record that in my opinion are more entertain to digest than their environs. "Chambers of Ages" begins with a solemn, morbid synth intro that buries you in the architecture before it merges into the death/thrash zone, and the title track has a pretty mesmerizing, cosmic breakdown where the choir synth hovers off against a slower rhythm. Coincidentally, both of these also have some of the better straight death riffs on the entire album, not unlike stuff you'd hear on Napalm Death's Harmony Corruption, and I'd gladly name them my favorites. However, they're offset by the remainder, and there are some relative stinkers here like the thrashing "Defeat Remains" with its boring Exodus bludgeon. The cover of the Death demo track "Corpse Grinder" is a cool idea; sufficient enough in the hands of this quartet as it might have been with Schuldiner involved, yet it follows a predictable, uninteresting notation. It's more than obvious why it never made it to a Death full-length as it stood.

Sooner or later, when you've got enough people stacked on your raft, you're going have to choose between sinking or knocking off some of the other sailors on the sea of fate. Massacre was such an elimination, never really amounting to much despite their potential visibility through the burgeoning British label and their relationship to Death, and easily fed off to the starving sharks. From Beyond is by no means a shitty debut album. It was tight on execution, featured a lineup who obviously loved what they were doing and had some credentials too boot, and sported a clean as a whistle Colin Richardson production. But it'd be one of the last players picked in a theoretical team volleyball match of Floridian brutality, because it's simply not that intriguing, not that catchy, and offers no new maneuvers that haven't been done better by the rest of the squad. Compared to the sophomore full-length (Promise) though, it's a work of art.