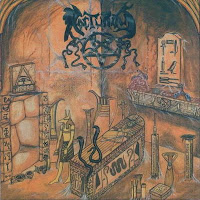 As it turns out, things did not pan out so swimmingly for death geek magnates Nocturnus after their sophomore Thresholds. While it wasn't exactly what I'd call a flop, it failed to capitalize on the bright potential of The Key, and their time at an end, the band was cut from the Earache roster, and thus the same potential success of peers like Morbid Angel, Bolt Thrower and so forth. There was also a legal struggle within the band, and longtime drummer Mike Browning (who had also been in Morbid Angel during their demo phase) was fired and replaced with James Marcinek. Inevitably, the whole band would grind to a halt, but they did manage to slap a pair of tracks on a 7" (and later CD single) through a younger Moribund.

You'll notice immediately via glancing at its cover that the Nocturnus EP has shifted lyrical focus from the dire science fiction of its predecessors to Egyptian mysticism and horror, but this is not exactly a letdown, as its a natural topic for imaginative speculation and makes sense (the band had explored the past before). There are but two tracks here, "Possess the Priest" and then "Mummified", for a total of about 10 minutes of content comparable to the material on their full-length albums. I found Nocturnus to possess a denser, stronger tone than Thresholds, but unfortunately the music here, while similar, is just not that memorable, not even at the level of a "Climate Controller". The guitars are choppy and busily strung against the unimposing backdrop of the keys, and the tempos shift from a thrashing median to bursts of blast, but there are no real choice riffs here or moments of commendable atmosphere that reach out to you.

The band is as technically competent as ever, but the songwriting is simply uninspired, returns diminished from even the slightly lacking sophomore album. With all of the potential their path of exploration had laid out before them at the turn of the decade, one wonders why they went so limp. Was The Key an example of brutal, premature ejaculation? Could they no longer get it up? They could have turned out so much better than this. What a frustrating turn of events.