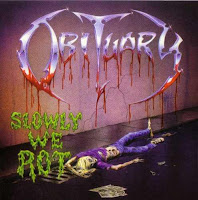 If Scream Bloody Gore or Leprosy could represent the cackling crypt lord ruling over the animated corpse court of a sepulchral domain, then Obituary's Slowly We Rot would be the shambling caretaker and enforcer, with a cruder outlook but the same ghastly intent. Having spent a good 5 years on the underground/demo circuit under the name Xecutioner, they were originally writing filthy thrash in the vein of Hellhammer or Venom, and you can certainly hear those influences carried to the extreme here. But foremost, the difference would be in the vocals of John Tardy. They're not entirely unlike Chuck Schuldiner, but taken to a grisly extreme that, while taken for granted by most today in lieu of the basement gutturals and pig squealing so common for death metal, were quite frightening in their age. You simply hadn't heard a man vomit this much into a microphone, and while Death kept the vocals creepy but level with the onslaught of fantastic guitar riffing, Obituary is cool with letting Tardy own the mix.

There are some similarities in the guitars also, but Trevor Peres and Allen West were using a thicker, more processed distortion highly reminiscent of the Hellhammer tone, and a lot of the riffs are slower and more doomy than those on Leprosy. That said, the motif works to great effect here, because Tardy's presence over such slogs as "Slowly We Rot" or "Bloodsoaked" will instantly transport the listener into the pit of festering terror that permeates this album. This is ultimately a very well paced effort, with equal measures of carnal breakdowns and faster zombie riots that conjure a morbid hypnosis. Once the resonant sewage gutturals of the "Internal Bleeding" intro cede to the drum fill, and the crushing guitars arrive beneath Tardy's initial torn throat, the band breaks into this incredibly primitive groove while you attempt to acclimatize to the vocals you are hearing. How does a human being sound like this without having appendages trapped in a meatgrinder? Truly sickening and effective, and the perfect balance for the more lowly mixed instrumentation and the effortless, wild tearing of the guitar leads that penetrate the atmospheric din like needles stitching the flesh of patchwork abominations.

"Godless Beings" moves at a faster slice not unlike the material you were hearing on Brazilian Sepultura's Beneath the Remains (same year), but then busts into this wall of groove which Obituary would use about 300 times through the rest of their catalog. The slower bridge here provides a great foreshadowing to "Memories Remain", perhaps my favorite song from the band (appearing on Cause of Death). From here, we hit on a number of other classics like the titular "Slowly We Rot" with its forceful doom drudge and total punk rock out; "Bloodsoaked" with the escalating carnage of its central riff and washes of harrowing vocal gore that cut through the intro sequence; "Stinkupuss" which has an amazing, shrill lead sequence in between its flesh quaking grooves; or "Deadly Intentions" with its thick broil of pulverizing Hellhammer thrash rhythms. A few of the riffs here were uninspired even by 80s standards and the newly burgeoning genre, and I've never been all that taken with "Gates to Hell" or the lengthy "Intoxicated" outside of the Tardy vocals, but Slowly We Rot is nothing if not consistent through most of the 35 minutes.

Considering the fresh menace of its newly dubbed genre, and the rare ability to hold up after so many years, it's safe to say that the Obituary debut is a bona fide death metal classic. It's not a masterpiece at the level of Leprosy or Altars of Madness because the individual songs don't possess that same level of riffing. This is an issue that was clearly addressed with its followup Cause of Death, which is superior and the best thing the band have released to this day. Yet Slowly We Rot is still well worth repeated visits due to its visceral, unforgiving aesthetics. I can recall many conversations in high school and at thrash gigs about how disgusting and extreme this new Florida band Obituary was, and certainly the debut does not disappoint, with brutal vocals and adequately nihilistic lyrics. But this initial 'shock' value aside, it does suffer from some mild redundancy where its successor does not.