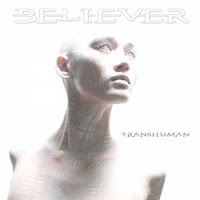 The chronological gulf between Believer's 1993 album Dimensions and their 2009 comeback (through Metal Blade) Gabriel was a substantial one, but I was still rather happy with the result. I've long considered this to be one of the better Christian metal acts in general, certainly one of the standouts of such secular thrash, because they portrayed their message with devotion and intelligence rather than hammering you in the face with obvious ignorance that seems so belligerent to a largely atheist or questioning crowd. Gabriel was, however, not so well received in the larger scheme. The band had continued to progress their sound, as they had from the great 1990 sophomore Sanity Obscure to the following Dimensions, but some felt there were not enough traces of the same excellence.

Well, Transhuman is true to that which its title implies, in that its taken Believer's sound about as far out of the mortal encasement of flesh that the bold and punishing core of Sanity Obscure once delivered. Though there are clearly some thrash undertones remaining here, this is more like a robotic fascimile of modern power and progressive metal. There are some chugging groove elements here that, when mixed with the almost Linkin Park-like melodic strain of the vocals definitely come up short (i.e. "Lie Awake"). Not that such a strain is necessarily unfit to the simpler thrash beneath, but it often feels like longtime frontman Kurt Bachman is attempting to deliver too much emotion throughout. Probably a better comparison would be the modern records of Germans Angel Dust, which use a similar mix of modern chugging and mid-range, soaring vocals, though Believer certainly get pretty angry on a number of these songs like "End of Infinity", "G.U.T." and "Clean Room", better reflective of the past records.

Sadly, despite the decent, modern atmosphere the band is kneading here to sufficiently flesh out their concept, the album is ultimately just not up to par with their backlog. The driving, primitive chug patterns are glazed in effete melodic guitars that never add up to anything memorable, and even the more 'experimental' ambient metal like the instrumental segue "Currents" feels a little cheesy. Some of the 'big hitters' like "Ego Machine" have a pretty awkward structure with the mix of shouted and clean vocals, and the overall work feels like something that might have been written and subsequently left behind in the mid-90s as a Fear Factory alternative by some similar act like Tourniquet or Anacrusis. As someone who truly enjoyed Sanity Obscure and the stranger Dimensions, and had remained onboard even for Gabriel, I found this effort to be the antithesis of compelling, easily the least of their works to date.