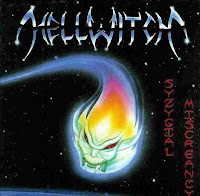 Hellwitch was another Florida act with a relatively substantial history behind them, before they were snapped up through the fledgling Wild Rags records. Forming in 1984, they produced a string of demos and rehearsals of a thrashing nature, gradually swerving towards a more aggressive pasture that merged the spacey, science friction of DBC and Voivod with blitzing speed and searing brutal thrash akin to Dark Angel's Darkness Descends or Pestilence's Malleus Maleficarum. Really, the only other band among the Florida crowd that was comparable to this sound was Atheist, yet here the vocals were not so psychotic, the compositions not so sadistic or condensed. Amusingly, while it's a good enough debut, Syzygial Miscreancy suffers a few of the same setbacks as Piece of Mind.

For a Scott Burns mix, this album is fairly smooth and clear, lacking some of the processed mud that dampened the debuts of Deicide or Malevolent Creation, but also not a far cry in the guitar tone and muted battery of drums and rhythm guitars. The cover art is incredibly bad, as if the Green Goblin's skull were transformed into a flame trailing meteor, awkward title placement providing a cringe worthy aesthetic. Definitely not on par with a Leprosy, Altars of Madness, or even the iconic simplicity of Deicide or Piece of Time, but then, there was no Combat, Earache or Roadrunner backing this band up. Stylistically, the band performs blitzkrieg thrash metal often interlaced with passages of almost frivolous excess. The various riffs are conjoined only in their quickening intent, and thus the transitions often feel sloppy, too stop/start. Not as catchy or well written as a lot of the technical stuff coming out of Europe (Coroner, Destruction, Deathrow and Vendetta), but they certainly evoke an interstellar asylum effect that places them in a rare order with Sadus, Nasty Savage, Terrahsphere, Atheist and so forth.

It's not a surprise that most of the songs here were taken from a few of the previous demos, but despite their separate points of origin, they flow with a crass consistency. "The Ascent" is a fine, lonely clean guitar passage which lasts all of 30 seconds before the skies collapse with their rabid vampire ode "Nosferatu", claimed from their first demo in '84. The band throw a half dozen riffs at you in hopes that they'll stick, but unlike the spasmic contortions of Altars of Madness, they do not always succeed. The lead sequence is great, the vocals barking and bloody, and then it's off to the Voivod-like intro "Viral Exogence", whence suddenly Hellwitch have discovered their vocabulary skills. Wordy titles abound, like "Sentient Transmography", "Pyrophoric Seizure" and "Mordirivial Dissemination", and the slicing hyper guitars nearly live up to them, creating a nexus of paranoia and brutal subdual for the confounded audience. Personal faves here are "Moririvial Dissemination", which feels like a post-apocalyptic Dark Angel circa '86; "Sentient Transmography" with its towering rhythmic vernacular; and "Pyrophoric Seizure" and "Purveyor of Fear", both polished from the earlier Mordirivial Dissemination demo (1987).

Unfortunately, Hellwitch are often in such a rush that they seem to trend towards expletive force over memorable songwriting. From a technical standpoint, this is definitely something that will spin your head around a few times on the spine, but only for the actual velocity, not for the cleverness through which its constituent ligaments are joined together. Syzygial Miscreancy is definitely a solid exercise in extremity, one that feels fairly fresh even by today's standards, but unlike several of their Florida peers, they don't really come up with 'hits' that you want to listen to repeatedly for decades. That said, this is an experience I would recommend to anyone that favors a spell of pseudo-intellectual depth with their riffing alacrity. The lyrics are well written, the concepts interesting and the potential barks raving mad up a different tree than what most of the death metal or death/thrash bands were pushing in the early 90s. It might be a little hard to find the original, but you're in for a treat with either the 2008 reissue (including a pile of their demos) through Displeased or the Final Approach compilation, which consists of this album and the follow-up EP Terraasymmetry. There's not enough here to really survive the near 20 year gulf before the slightly superior sophomore album in 2009, but it's a curious and punishing excursion to the brink of sanity.