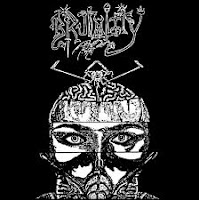 Brutality. How many bands must have striven for that particular moniker, only to have realized it was snatched out of their grasp by this one? Direct, memorable, and to the point, you cannot help but to like it. In fact, you cannot help but to enjoy the lion's share of this Florida act's material, because they produced two excellent and underrated albums during the USDM burst of the 90s: Screams of Anguish (1993) and When the Sky Turns Black (1994). Alas, the band had already been around for some time, and took some time to develop their grisly roots to the level of such cult classics. Hell on Earth was the band's first 'official' release after a string of demos. The material was snagged from the latest of these (Dimension Demented) and showcases a far more primitive, less effective entity than what they'd become.

Basically this is crude thrash and grindcore with a huge influence from Hellhammer or Celtic Frost. Dumb and pissed off, too often cussing lyrics about drug addiction and other domestic abuses. Painfully few riffs of any note, and vocals that cast a brutal and blood drenched glamor, but stick out far too much from the mix. "Hell On Earth" is a simple burst of violence burdened with obvious, predictable notes, though the breakdown at 1:30 is carnal and effective with the sloppiness of the raw solo riding it. "Narcotious Addictous" would be the track most reminiscent of Celtic Frost, with the same sort of low-end, grinding groove that band made popular on their earlier works. This would also be my choice of the three here, because the vocalists come up with some grisly screams and throat tearing amidst the less worthy lyrics, and there's another wet and messy solo. "My First Night" is a bit more straight hardcore/punk crossover with metallic screaming and a speed lick in the bridge.

There are quite a few ideas here, almost a nexus of the various extreme metal formats that were flitting about the scene in those days: hardcore, grind, and primitive death metal the foremost among them. However, where the band's later albums show excellent atmosphere and focus, this feels like something any band could have ground out in their garage one afternoon. The mix is muddy and unbalanced, the songs almost entirely ineffective, lacking the structure and menace of their Floridian peers (Morbid Angel, Death, Obituary and others were already tearing us a new one). I didn't get anything out of this. That said, do not think to ever write off this band due to Hell On Earth; because the blood tides will turn far in their favor in the ensuing years.