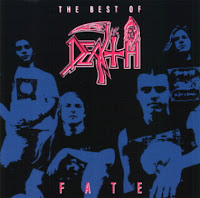 I've already gone on about Relativity's debauchery with my review of Dark Angel's Decade of Chaos compilation, but the California thrash cult is not the only artist to receive such a worthless tribute in that label's hands after they acquired much of the Combat roster. Naturally, Death would see some exploitation, being that Chuck and company were one of the hottest and better selling acts to make the transfer, and the result is Fate: The Best of Death, an absolute waste of plastic and print that should never have passed through the lips of any womb, corporate or artistic. As you have guessed, this is nothing more than reprinted tracks from the first four albums of the band's catalog, with some added liner notes (gee thanks).

Let's be perfectly blunt about this: Death fans fucking love Death, and by this point unless they were nursing a crack or heroin addiction they had likely accrued the funds, even via a paper route or Saturday morning lawn mowing gig, to purchase all of the band's prior material. Their new home distribution center, Relativity might have realized this and then worked with the band to produce a decent collection. After all, this band had a huge number of demos and rehearsal material leading up to their Combat signing, and a few strings pulled for permission might have netted us some 2xCD set that would be well worth owning. Instead, in some blatant attempt to rob the dregs of naivety, they chose instead to reprint 10 tracks that all but the suckers were already in possession of: "Zombie Ritual", "Mutilation" and "Baptized in Blood" from Scream Bloody Gore; "Left to Die", "Open Casket" and "Left to Die" from Leprosy; "Altering the Future" and the title track from Spiritual Healing; and "Together as One" and "Suicide Machine" from their then-latest, Human. So basically 10/34 of their songs to that point.

Is it an amazingly representative track list? In so far as it contains a fair spread of material that favors the earlier (better) albums, it could be worse. But then, what is the point? Few if any fans of this band had an interesting hovering below pure obsession, and anyone new to their sound would be far more rewarded by pursuing any of their full-lengths than this, even Human which was creating circle jerks among the underground (though I found it a disappointment). This was made for nothing else than filling the coffers and fueling the corporate record industry schema, and it has absolutely zero value to anyone with a grain of sense. Why not just print a greatest hits album for every Death record, with the same track lists mixed up in order of preference by some shill? Could have made four times the money, for four times the garbage. Remastered or not, this sucks. Curse such greasy cash ins and all who support them.