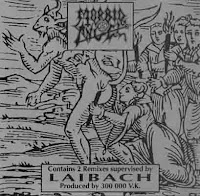 Within their 30+ years of existence, Slovenian industrial/electro act Laibach has covered, remixed and deconstructed a wealth of material from acts the world wide; from classics acts like the Beatles to more extreme and obscure fare. Considering Morbid Angel's leaning towards experimentation throughout the mid 90s and beyond, and the transition of industrial and electronica from the club and cult scenes to the mainstream, it makes a lot of sense for the two to collaborate, even if that union was limited to a pair of remixes. The Laibach Remixes EP provides a simple equation: lift two tracks from a band's most recent studio album (Covenant), then sample and mutate them to evoke a decidedly dissimilar atmosphere.

Now, the inclusion of the originals ("God of Emptiness" and "Sworn to the Black") is rather useless if you've already acquired the full-length and absorbed the material, but here they are not inconvenient as a 'control group' for what Laibach are attempting. Surprisingly, the remixes are not major attempts to re-structure the tracks, only to filter them through clanging dystopian landscapes. Within "Sworn to the Black", this is achieved through the mere incorporation of pipe like percussion and reverb to the original. It's not a huge difference, really, but I do rather enjoy this subtle twist, and in fact I prefer it to the original. What they've done with the other piece, "Gods of Emptiness" is much more substantial and impressive, tweaking not only the drums but also the vocals and adding a choppy, mechanical ambivalence. Vincent is more drawn out and deepened here, and the result is something more creepy than the original, though perhaps not entertaining for very long (I would have liked to hear more variation and alteration).

The biggest issue with the EP is simply that there is not much to it at all. It's a positive that the Slovenians did not make a bad techno mockery out of the material like you'd find on the Fear Factory remix album Remanufacture, but there's not a hell of a lot here to justify the product. Had this been a half decade later, these tracks might have just been released to the internet for the fans of both bands to peruse. I kind of dig the cover and the concept behind this, not to mention both bands involved, but the scarcity of content is crippling unless you're a collector who simply doesn't care about anything more than acquisition of the product itself. Also, perhaps a bit more could have been attempted by Laibach to draw the material more into their own realm of manipulations, rather than playing it so safe. Curious but easily avoidable.