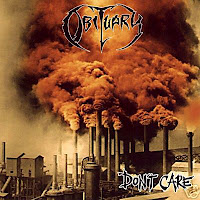 The Don't Care EP is just another of those padded corporate pocket liners that has been manifest simply to direct currency into the label and (hopefully) the band itself. Released a few months before the band's heavily groove-oriented World Demise, it features two tracks from the full-length and one that you wouldn't find until the 1998 re-issue, which arguably is the only piece of value to anyone hunting for this. Even the cover to Don't Care is incredibly lazy, just a zoom on the smokestacks present on the full-length's facade, filtered through a different color palette. If anyone had given a fuck about this EP, they might have restricted the redundant content to just the title track, then peppered in a few extra live tunes, videos, and more non-album, unreleased material, but it's nothing but a teaser.

The central piece is of course "Don't Care", in which we get the first look at the new Obituary. Having found The End Complete to be a ruddy and forgettable rehash of their great sophomore Cause of Death, I had no idea what to expect, so I was rather pleasantly surprised by the huge grooves the band set forth. The lyrics seem pedestrian on the surface, but there is more to them, and John Tardy's growling charisma fits the mold well, and the primal leads work really well over the bridge. The tune also plays it short, only around 3 minutes, and its probably the band's most 'accessible' yet. "Solid State" is the other album track, a pumping hardcore groove built for the flexing of violent limbs, but despite its swagger, it soon becomes incredibly repetitive, and the gimped, lazy mosh breakdown near the close of the bridge is incredibly weak.

"Killing Victims Found", the non-album bonus, is very similar. It takes an effective, leaning groove and then alternates it with the massive, stock Obituary wall of chords and belligerent, almost tribal drums. Definitely carries the huge Hellhammer/Celtic Frost tone and influence that we'd all come to expect from the Floridians, and does so rather well. I don't love the song, it suffers from the same sort of repetition for diminishing returns that "Solid State" commits, but it is admittedly the best thing about this EP. Unfortunately, the track is included with the reissue, rendering Don't Care completely useless in retrospect. And in all honesty, anyone with even a half-canny suspicion would have realized this was just as worthless as nearly any CD single or promotional EP in those times. Do yourself a favor, if you're interested band's mid-90s style, save the money on this and make a direct line for World Demise or Back From the Dead. I can't promise either is a good album, but certainly they are more cost effective.