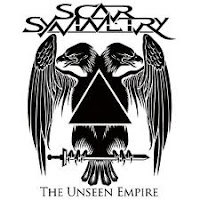 Scar Symmetry are another of the Swedish bands attempting to bridge the melodic death roots from which they've sprung with the commercially viable aesthetic of clean vocals, futurist lyrics and a progressive, groove metal leaning. Essentially, you take Soilwork's excellent Natural Born Chaos and expand upon the ideas there, increasing their latent complexity, and you wind up with something like The Unseen Empire. That said, it's more than obvious that this Swedish all-star act have spent considerable time composing their material for a balance of memorable chorus segments, pummeling chug breakdowns, well structured leads, and intricate faster paced melodic death/thrash riffs. It's a mesh that many will be loathe to even consider, others will revel in the unflinching 'forward thinking' of such an album.

I fall somewhere in the gray area between such poles. Surely, The Unseen Empire is a superior offering than anything this band has released to date. Albums like Pitch Black Progress or Dark Matter Dimensions left much to be desired, but I found myself nodding along and appreciating a few of the tracks here. Several of the mosh grooves here, like those found in the depths of "Extinction Mantra" or "Domination Agenda" are fortunately the exceptions to the rule, and most of the disc spends its time distributed through the glossy chorus melodies and half-interesting guitars. Despite the formulaic feeling of the grunted verse, sung bridges and choruses, the music does well enough to offer some variation through, from the cyber thrashing of "Illuminoid Dream Sequence" to the graceful, compartmentalized dystopian drift of "Astronomicon" or "The Draconian Arrival".

Of course, Scar Symmetry does the two vocalist thing like the heinous Linkin Park or numerous annoying metalcore and fairyGoth bands: veteran Robert Karlsson (Edge of Sanity, Tormented, etc) covering the growls and Lee Palmqvist taking the cleans to a hybrid of Speed Strid and Jape Perätalo's (To/Die/For) Simon Le Bon impression. I'll be honest that I don't really care for the mix here. Neither is bad, and both are well attuned to their respective styles, but in congruence it feels all too manufactured, too forced in tandem; whereas having one front man like Speed on both ends of the spectrum feels a little more natural. Granted, the plasticity and cubicle pallor of the combination does match the band's futurist motif, but it still seems a little played out by 2011. Fortunate then that Kjellgren and Nilsson have enough good riffs in them to distract us away from this duo when necessary.

Ultimately, the album works, perhaps the first Scar Symmetry full-length that I'd consider 'good', if only marginally so. It's catchy enough to justify itself. It would be the perfect gateway drug to some poor sod whose girlfriend (or boyfriend) listens to My Chemical Romance and 30 Seconds to Mars and is planning a subtle, seductive conversion to extremity, and I don't mean that as an insult. The Unseen Empire is meticulous if not substantial, like a sugar high: won't grant a lot of mileage, but it tastes sweet enough for a spell. It's like the metal equivalent to all of those modernized automobile ads with tons filled to capacity with future cityscapes and massive CGI layering and effects. Shiny, processed, synthetic escape. Not without precedent, but rather than hide from the glare of circuitry, it instead revels in its contemporary craftsmanship.