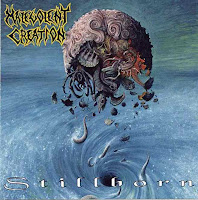 I'm not sure if it can be attributed to creative constipation, or a dead set determination to maintain stylistic consistency through a career of diminishing returns, but Malevolent Creation are a band that peaked early and then proceeded to write what is essentially the same album through several decades. Okay, not the exact SAME album, there are minor deviations here or there, shifts in their production paradigms, altered rosters, curving apertures of slower and faster based material, but you catch my drift. I don't mean to hate on the band, because there is a positive side to this strategy (or lack of a strategy): the band has never, to my knowledge, released a stinker of a record, at least not a full-length under this particular moniker (the side band Hateplow is another story).

Stillborn was their third and final album through Roadrunner, and had absolutely nothing going for it over its predecessors. There were a few personnel changes, with Rob Barrett (guitar) and Jason Blachowicz (bass) exiting and Jon Rubin (guitar) coming on board, but other than that, it's a facsimile of the concepts the band were already utilizing. Perhaps this is a little more 'slamming' than the first two albums, as tracks like "The Way of All Flesh" and "Genetic Affliction" have some tremendous, concrete cracking breakdowns, but this was not at all unusual for US death metal as such chugging grooves strode hand in hand with a largely crossover audience. All the riffs are performed here with competence and energy enough to compete with any of their Florida peers, and yet the music just never seems to stick. Bruising the listener, but never really breaking skin.

I enjoy the lead breaks throughout the album, and a few tracks like "Dominion of Terror", "Ethnic Cleansing" and the desperate, thriving finale "Disciples of Abhorrence" offer more or less what you'd expect from an active, touring band like this: dynamic awareness and decisive, taut brutality. Alas, the sound here is just not all that great. I felt a greater disparity between the volume of Brett Hoffmann's vocals and the music pummeling beneath them, and there are very few interesting or exciting rhythm guitars I'd ever desire to puzzle out or revisit. Most of the Malevolent Creation full-lengths inhabit the same breadth of the qualitative spectrum, but there's nothing on Stillborn you can't get elsewhere, and better, even from Fasciana and co. themselves. This is one of the band's studio lows. The Ten Commandments, Retribution, and a number of the Malevolent albums since this one simply have more to offer from both the songwriting and production perspectives.