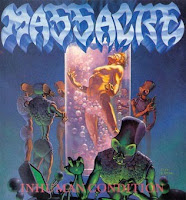 Intent on carving a name for themselves among the stalwarts of budding brutality, the ex-Death cavalcade known as Massacre capitalized on their lukewarm debut From Beyond with a smaller collection of songs in the following year. Steve Swanson, who would later go on to Chris Barnes' post-Cannibal Corpse project Six Feet Under, was added here in the second guitar slot, and the band would continue to pursue pretty much the exact same style as we would expect, a peripheral mirror to the sounds beings produced by Death in their prime. You can't exactly fault them for such, after all, they WERE the backbone of 'that other band' during the wealth of its emergence. Once again, Massacre uses a rather gaudy Ed Repka cover image, reminding me a lot of one of the covers for Heinlein's Stranger in a Strange Land, but at least superior to the funhouse effect of From Beyond's vortex riding beasties.

As for the tunes, three of the four here are originals, some of which have been recycled from the earlier years of their incarnation. "Provoked Accurser" had been issued as a one-sided 7" in 1991, an astute waste of plastic. "Plains of Insanity" is an earlier track from years before ever being signed to Earache. "Inhuman Condition" itself is the newest, sounding a lot like a Leprosy standby in tone, sans the effectively evil guitar passages. However, I will admit that I like the new, morbid depth to which Kam Lee takes his vocals, almost overwhelmingly guttural and alien. The leads are also kind of sweet here as they dodge and dice through the matrix of rather drab rhythms. "Provoked Accurser" is slightly more brutal, and the rhythm behind the lead (and its own squealing) provide a grating, authentic moment of old Death, but otherwise it's forgettable. The same applies to "Plains of Insanity": I like Lee's vocals, but the music is neither compelling nor inspiring.

Lastly, they've got a cover of Venom's "Warhead" here, and in a not uncommon maneuver (at least in later years), Cronos himself appears to 'grace' the rendition. It's a better song than any of the Massacre originals, and sort of fun with the mix of Lee's groaning and Cronos' hacking, but not itself worth the cost to purchase this. Thankfully, you might not have to: if you've looked past the admitted mediocrity of the band's material, Inhuman Condition is included with the 2000 re-issue of From Beyond. It's also worth noting that this was initially the 'end' for Massacre, at least for a few years until they'd switch up the lineup and return with the abominable sophomore Promise, which would REALLY be the end. Regardless, a cloud of cult buzz surrounds this act like some swooning halo of flies, and while it might not be all that deserved, there's nothing about their pure death material which was all that offensive or tasteless.