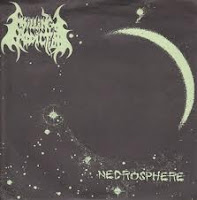 I can't say that Killing Addiction were one of the more successful Florida death metal outfits, but they were unquestionably one of the most brutal, so much so that I'm surprised they're not talked about more often in today's circles of nostalgia. There's a massive scene today for the sort of hugely cavernous sound these guys pumped out through the Necrosphere EP, and even though two of the three songs here were made redundant on their JL America debut Omega Factor in 1993, I actually prefer the versions from this 7". The guitars here are raspy, indelibly raw and primal, but almost completely smothered by the tumult of Pat Vailey's guttural vocals. They were pretty much the most guttural thing going outside of Incantation at the time, and though they are clearly too loud in this mix, they nonetheless provide most of the atmosphere.

Otherwise, the band is canny and competent, with some dynamic variation between the rabid leads, chugging low-end and faster paced explosions, but the production is rather shitty. Of the three tracks, I prefer "Covenant of Pain" for the extended lead sequence near the end, wound loosely over some thrashing mayhem, and this is ironically the one that wasn't on the full-length. "Impaled" is likewise impressive for its lengthy, synthesizer outro which is joined by a drudging, cosmic doom riff and both guttural and snarled vocals. Had the entire EP been ridden with such segues, I'd probably be far more fond of it as some lost gem of interstellar doom/death, but its quite an impressive tail for the content here. The first track, "Necrosphere", I wasn't as keen on, but it's nonetheless wispy, brutal and effective enough that you'll want to cringe under your bed until the bad things go away.

Really, the only issue with Necrosphere is that it sounds like a diseased fuckhole. But as it was released on the tiny Seraphic Decay label, there was not a big budget behind it, so it's somewhat understandable. That said, this is something you might just be able to get into if you've been a fan of all the decrepit, yawning old school death that's all the rage in recent years. The most interesting aspect is that Killing Addiction sounded almost entirely like any other Florida death metal group at the time, more in the range of an Immolation or Incantation. The band reformed a few years ago, so they're back today, but I can't speak for their latest output just yet.