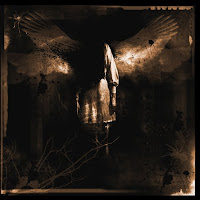 Based on the strength of their first three albums (Songs to Leave, Springtime Depression and Love's Burial Ground), I would have felt no hesitation in naming Forgotten Tomb my all time favorite metal act from Italy. Unfortunately, their following, fourth effort Negative Megalomania sought to modernize the band's languishing, melodic black metal sensibility, and the change was simply not all welcome. It was by no means a poor full-length, but seemed to me to lack all of the puerile, ghastly architecture of its forebears. The band has since taken some time off, but rather than return to their foreboding, grim roots, their latest Under Saturn Retrograde seems to follow in the same motions as its direct predecessor, a clean and tidy excursion into the driving, melodic fundamentals wrought by acts Agalloch, Katatonia and Opeth.

Not that this is necessarily a bad move, but I rather miss the more vicious, snarling vocals and demented, depressive atmosphere so latent in Songs to Leave or Springtime Depression. This album often feels like its dragging its feet, despite the obvious propulsion in production standards that it has over their formative releases. Each of the nine tracks is graced with at least 1-2 riffs that provoke atmosphere, but they are set against a mundane backdrop of straight doom rock guitars ("Shutter") or Gothic/black drawl ("Joyless"). There are some shining, eerie components to "Reject Existence", "Spectres Over Venice" and the bloated "You Can't Kill Who's Already Dead", and at least for those last two I felt like a time capsule had opened on the band's past, but then you've got the rather vapid cover of The Stooges' "I Wanna Be Your Dog", or the tranquil clamor of "Under Saturn Retrograde Part II" that don't feel as if they have much to contribute to the suicidal terror so inherent in the first three albums.

Ultimately I found this even less effective than Negative Megalomania, but I wouldn't say its a total waste of time. There are good ideas present, or at least the shadows of such ideas, and the mix of the album is quite astoundingly bold and bright, almost in tandem with the band reaching their next stage of accessibility. If you're into primal driving Gothic death or black metal, or the depressive black acts who risk using higher audio standards (Lifelover, Apati, etc) then there is a likely some appeal to this. A handful of riffs stand out, and the album is undeniable moody (and not in a 'good' mood); but I felt none of the same cavernous convulsions of agony that made me want to slit wrists and paint the walls and sky with my drained life force.