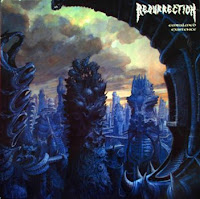 Resurrection might have come along a few years too late to avoid the precedents that had been laid by their Floridian peers, but they did an admirable job of refining the bludgeoning force of Deicide, Pestilence, Obituary, and Death into something nonetheless worth a listen. What's more, the band used a series of narrative vignettes to herald each of the tracks here, an unusual idea that, despite feeling somewhat cheesy in retrospect, actually works in acclimating the listener to the beating he or she is about to receive. In other words, Embalmed Existence is not afraid to take a risk or two, and while this is my no means a legendary, top shelf ordeal, I have no hesitation in naming it one of the better Florida death records of 1993, with more durability than even heavyweights like Morbid Angel and Atheist were able to muster that year.

The debut also benefits from great production and even greater cover art. Granted, Scott Burns and Dan Seagrave were the usual standbys for this scene, but both did good by Resurrection. The mix is pummeling and clear throughout, with a nice contrast of hammering rhythms and leads. The frontal image whisks the listener to phallic catacombs of obscurity, which seems to suit the music wonderfully. Embalmed Existence is hardly choked with riffing innovation, and you can certainly hear very clear similarities to Slowly We Rot, Leprosy, Cause of Death, and the Deicide s/t twisted through its eight original compositions, but they are quite capable of packaging tight, skilled musicianship into primal patterns of gorgeous evil that alternate between massive chord schemes and chugging morbidity. Even better, the band has an unusual knack for writing an almost 'uplifting' bridge element into an otherwise brutal piece.

You hear this right away in "Disembodied", a polished bludgeon interlaced with deep chimes and melodic chords (reminiscent of Pestilence) both in the bridge and conclusion, a somewhat wider emotional palette than one was used to from a death metal tune. "Rage Within" uses more of the massive chords, creating a parallel to Obituary that is betrayed only by Paul Degloyer's less carnal vocals. "Embalmed Existence" has more in common with Death (Leprosy and Spiritual Healing), with strong, memorable riffs and just a hint of menace; while "Torture Chamber" is redolent of the pummeling sedition of Deicide or Malevolent Creation. Perhaps the best songs arrive near the end of the record: the determined "Test of Fate" with its writhing slugfest of guitars and "Pure Be Damned" with its concrete lead and bridge sequence and cheap, effective breakdown.

The cover of KISS' "War Machine" might not have that same, groovy power as the original, but it's a curious choice for a death metal band, and DeGloyer's growling brings it in line with the band's own compositions, if it lacks some of the same low-end thunder. Overall, though, this debut does deserve the status of a minor cult classic. It's not complex, the lyrics are mediocre, and for the most part its not original in the slightest, but it surely captures the mood of its era with a fine balance of brutality and subtle depth. Of course, being that they're not the fastest or most proficient pick of the litter, Resurrection would be relatively overlooked despite their qualities. They had one of the better early death metal records on the Nuclear Blast roster, but despite their visibility, they never seemed to get anywhere, and maintained relative silence for 15 years until their cleverly titled comeback Mistaken for Dead.