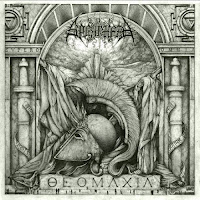 England seems to be a new hot spot for fast paced hybrids of death and black metal intent on taking absolutely no prisoners. Among these I'd number Scythian and Spearhead among the front runners, the former having debuted in recent years, the latter now pummeling the fuck out of us for the third time with Theomachia. This is a hostile piece of work here, a hyper accelerated freight train wrought with such production that the band had not previously attained through Deathless Steel Command or Decrowning the Irenarch, rich and direct guitar tones and inhuman skin smashing slathered in a brutal, vexed prose. Think classic Morbid Angel if they had a bit of a street gang leaning to them, an infusion of grind and hardcore anger, almost like Benediction's later efforts if they were ramped up in ability and effectiveness.

I can't promise that the riffing here is all that memorable, as Spearhead seems to just go with what works at a million miles and hour and then rarely elaborates or hurls a surprise in your direction, but the overall impact of their music will continue to beat you until you can't bruise any more. What's more, the additional trappings of the album are really well done, like the churning holocaust of the "Eschatos" intro with its ensuing male chants of gravitas; or the escalation of the martial interlude "Praesagium" with its sampled narrative. Of the sheer metallic content, I found favor in the Bolt Thrower-like shellfire grooves of "Herald the Lightning", which alternates into some of the slower rhythms of the entire album, or the relentless "Autocrator" with its massive, hefty frontal assault and then some styling, steady breakdowns which will transform even the most jaded witness into a fist swinging, belligerent hessian. There are also some worthwhile leads in "Polemos Pater Panton" that offset the stop/start marching steel hymns.

Admittedly, though, the songs do lack a bit of distinction, resting fully upon the foundation of riffs that will feel familiar to anyone having listened through extreme black or death metal through the years. In fact, despite the tendency people have to label this band a hybrid, there are little to no black elements outside of the sheer, ruthless velocity and a mild connection to the blackened war metal we've heard out of Poland or Scandinavia (earlier Marduk, War,etc.) This is for the most part a straight burst of grinding death to the face, with production values that keep it loud and fresh through the speakers, and lyrics well versed in the Roman Empire and other historical points of power and notice. If you're on a sojourn for unadulterated missile speed, taut execution and crushing grooves, then Theomachia should sate such wanderlust: this is not fit for walking on eggshells, but for trampling the entire chicken coop. If instead you prefer your warfare subtle, with distinguished riffing that you'll want to repeatedly visit through the years, then this album falls somewhere short of enemy lines.