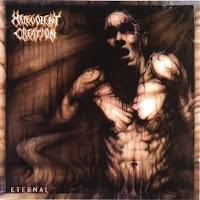 After Stillborn failed to meet expectations, no new deal was brokered between Malevolent Creation and Roadrunner, so the band hopped over to the Pavement imprint. Eternal was the first result of this union, a work of strong initiative but little lasting resonance that would further cement the reputation of this band as solid second stringers. This was also the debut for Jason Blachowicz on the vocals and bass, who would hang around for a pair of albums before venturing off into his own realm of brutality: Divine Empire. He's got a filthy, caustic, towering presence, almost redolent of L-G Petrov during Wolverine Blues, if slightly shorter on character, but well suited to Fasciana's bruising rhythmic sensibility.

I can see how this effort might have a divisive effect on the audience. It is heavily front-loaded with a lot of straight slamming death with an almost hardcore underpinning, and frankly rather formulaic. Incredibly tight, driving double bass is slathered in a mix of palm muted grooves and uppity old school rhythms. It's very 'tough guy', especially the opening combo of "No Salvation", "Blood Brothers", and "Infernal Desire", but things start to pick up once you get deeper into the track list. "Living in Fear", "Enslaved" and "Hideous Reprisal" are more my style, the latter with some spry, Pestilence-like "Trauma" chords slung over the shifting more of mosh below. In fact, the entire closing quarter of the album is solid: "Eternal" with its incessant warlike muted grooves, "Tasteful Agony" ranging from an accelerated opening onslaught to a series of open chord grooves that once again stir the restless pit fiends.

The production values here are a step up over the underwhelming Stillborn, and aside from the debut The Ten Commandments, I feel like this album is the quickest to incite violence in the listener. Alas, Eternal suffers the same frustrating roadblock that so many of their albums face, and so many brutal death albums in general: lack of memorable content. It's a soulless if tightly executed exercise in moshing force, with almost no atmosphere whatsoever. None could question the brutality here, but would it be too much to ask for a few menacing melodies or acrobatic impressions, above and beyond the sheer exertion of physical force? Malevolent Creation could write six of these albums per week, but they'd never surpass this plateau of methodical, mechanical functionality. Eternal is fine for ass kicking or getting your ass kicked, and I enjoy that Fasciana and company maintain their thundering street cred, but it's hardly the first album I'd turn to on a hunt for compelling music.