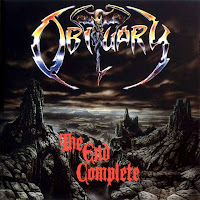 In 1989, Slowly We Rot caused us to cling our Bibles in terror, hiding from the things beneath the bed and in the closet; John Tardy upping the gory game with vocals that stretched into terrifying incredulity. In 1990, Cause of Death took the same principle of sound and refined it into the best set of songs Obituary has ever (and likely will ever) unleashed upon the populace. Momentum was clearly in the band's favor, and thus when it was announced that their third effort would be dubbed The End Complete, I was personally expecting some anomaly of epic disgust that would shake the very foundations of all taste everywhere, and plunge us into the morbid, threatening skies (haw haw) of the apocalyptic, desolate cover art...

Well, safe to say that The End Complete is nowhere NEAR that level of quality, and in fact it is what I might consider one of the most 'overrated' albums in all of classic death metal. Now, I choose such a word carefully, knowing all of the butt hurt it will create, letter bombs and cow paddies being sent towards my address with due haste. I only use it here, because financially speaking, this album was clearly a success for Obituary, or for death metal in general, selling its fair share of copies. But it's really nothing more than Cause of Death II, with almost nothing to distinguish it from its vastly superior sibling. The riffs and patterns here are naught more than minor deviations to the formulas of the sophomore, with any potency and wretchedness being wrung out like old blood from a sponge. Yeah, some stain will remain, but not the memories (okay, enough with the cheap puns).

Now, naturally I am not opposed to an album following in the cemetery-treading footprints of its predecessor, but unfortunately that path has led to an unassailable stone wall of creativity. It's not the style of The End Complete that suffers, but the songwriting, which is honestly one of the laziest examples of 'paraphrasing' I've heard in this genre. Sure, many do it unconsciously, but this album truly feels like an egg scrambling of the first two. Shit, we need another album? Let's put on our thinking caps. 15 minutes later: Oh, fuck this, let's just rearrange some of the older songs, change up the leads, and profit. All of the sodden darkness of Cause of Death is drained out within about three songs here, the dull and warlike "I'm in Pain" with its predictable notation until the faster bridge fails to save it; "Back to One" which opens almost like a sequel to the great "Memories Retain" only far more boring; or the chugging, mud mosh of "Dead Silence", which, despite its decent leads and honest neanderthal moshing, is just as unmemorable.

Does the album get better than this? Not exactly. John Tardy still has what it takes to splatter the musical content throughout, and a few of the tracks in the thick make an earnest break for something more, like the lead to "In the End of Life". But these are counterbalanced by such generic fare as "Killing Time", whose initial bouncing escalation sounds almost entirely a doppelganger of Death's "Pull the Plug". About the only track that doesn't bore my socks off would be "The End Complete" itself, not because it's really noteworthy, but the primitive groove of the Hellhammer derived rhythms creates at least a moment or so of escape.

If this were the first death metal (much less Obituary) album I'd ever heard, and I had just fallen off the proverbial turnip truck, then it might have had more than a middling impact, but exposure to the band's prior output as it was being rolled out of the sewer and on to the retail shelves ensured that would not be the case. The End Complete was essentially The End of This Band Releasing Good Records. Maybe that's an overstatement...Xecutioner's Return was decent and a few of their groove/hardcore albums had some riffs worth revisiting, but this was truly the first sign that we were not looking at a death metal dynasty, but an empty parking lot of corpse strewn creativity. It might not suck, but neither does it suck the listener into the charnel crypts of its enormously superior, elder siblings.