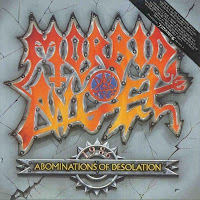 Earache Records must have had a lot of faith in their burgeoning new superstars Morbid Angel, to release this so early in their career. Perhaps if they had tossed this on the racks in the mid or late 90s, it might be more understandable, but I'm sure it sold enough despite itself to have been a worthwhile cause for them. So it goes without saying that this is not a new album, but a group of demo sessions that were originally planned as the band's debut in 1986, now considered just a demo by Azagthoth as they were never officially manifest. Through the years, the recordings had surfaced through bootlegs, so this was a situation of 'why not have the band and label making money if it's out there anyway?' Touche, motherfuckers, touche.

Ironically, though the recordings were produced by none other David Vincent, he was not actually yet in the band. This was a much different Morbid Angel roster, involving bassist John Ortega and drummer/vocalist Mike Browning, the latter of whom would go on to Nocturnus. Trey and Richard Brunelle were the only members that would go on to the amazing Altars of Madness album and the less impressive Blessed Are the Sick, picking up Vincent soon after this and Sandoval a few years down the stretch. If you're expecting some wealth of unheard material here, you will be sadly disappointed, because almost all of these tracks were revamped for the various full-lengths, even though some of the titles were changed. Three of them would be recycled to Altars of Madness: "Chapel of Ghouls, Lord of All Fevers and Plagues", and "Evil Spells" (the last titled "Welcome to Hell" here); three to Blessed Are the Sick: "Abominations", "Unholy Blasphemies" and "The Ancient Ones" (retitled from "Azagthoth", thus an egotistical namesake piece); "Angel of Disease" reappearing on Covenant, and "Hell Spawn" later dubbed as "Hellspawn: The Rebirth" and exhumed for Formulas Fatal to the Flesh.

Some good songs in that mix, undoubtedly, but they sound kinda crappy here. I'm actually a fan of Browning's vocals for Nocturnus' great debut The Key, and they're functional here too, but I find that the musicians (especially Trey's leads) are incredibly frivolous here, using too many effects and sounding like a giant porridge of unhinged excess. Vincent's production isn't really all that bad, but without exception, every single track found here is much improved with the budget and focus of the band's 'actual' full-lengths, so there is not a single reason to listen through this unless you're: a) just curious, or b) that obsessed with hearing Browning vocals over these cuts. There is one song here which has remained in oblivion, that being "Demon Seed", which has parallels to the Altars of Madness frenzy if injected with some straight up NWOBHM style riffs. Barbaric, sure, but not at all worth the price of this collection.

I've heard CD-R rips of the band's first few demos, and obviously this is a step up in sound quality from that, but I can't think of any reason to drop cash on this unless you feel indebted to the band and want to offer them more support. Alas, since they're not on Earache anymore, it's likely they would not receive much of it anyway, so buy an extra ticket to one of their gigs, or a t-shirt from the merch booth instead. As a window into the past, this is far from the worst thing I've heard, but these versions frankly suck when compared to the later studio efforts. Let's put it this way: the band didn't really want to put this out. The label didn't want to put this out as an official debut album. Such confidence! It wasn't really good enough for either institution, so why, by the tendrils of the Old Ones, would it be good enough for you? Because it has their goddamn logo on it?