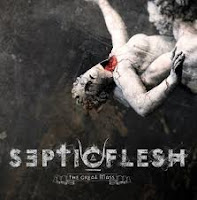 While I've always been partial to the earlier works of Septic Flesh (Mystic Places of Dawn through A Fallen Temple), there is no question that the Greeks have been on a major tear of late; their past two full-lengths Sumerian Daemons and Communion going viral, exploding their listener base exponentially. An incredible second wind for a career that was ailing by the turn of the century. Justifiable, of course, as the recent albums had immense production values and forceful, memorable songwriting, both of which continues here upon The Great Mass. But what separates this from its direct lineage would be the huge improvement in the band's ability to incorporate their worldly, symphonic elements.

Such an expansive interest was evident in Septic Flesh (Septicflesh, whatever) form their early years, in which the band incorporated female, operatic vocals and synthesized orchestras to positive effect, but The Great Mass escalates this marriage of instrumentation to a level previously achieved only by Therion in their prime, or Hollenthon's With Vilest of Worms to Dwell, and album quite similar to this one in potency and quality. The Great Mass flawlessly integrates the brutal death medium into the glaze of sweeping strings and percussion, evoking the gravitas of dead, ancient civilizations and forbidden rites through dynamic whorls and theatrical escalation. From the eerie and ethereal musings that inaugurate "The Vampire from Nazareth" to the massive, Gothic architecture of the finale "Therianthropy", the listener is cast through a climactic struggle of epic proportions.

I was initially concerned that the symphonic bombast might quickly overtake the core metallic elements, but I'm happy to relent that "A Great Mass of Death", "Mad Architect", and the magnificent "Five-Pointed Star" are loaded with guitar hooks, excellent drumming and Spiros' magnanimous growls. Not a single moment of this album feels imbalanced or imprecise. Whereas an album like Dimmu Borgir's latest Abrahadabra sacrifices guitar quality for its broadly painted classical overtures, Septic Flesh have discovered the precise ratio in which one half of its elated charms do not overtake the other, and written ten tracks straight down the line. I would not deign to choose a favorite, because I can't think of one that doesn't have some measure of rapture to offer the audience, but "Five-Pointed Star" and the steady, percussive roil of "The Undead Keep Dreaming" are particularly powerful, but the entirety is an experience well worth lavishing the coin upon and taking in a dark chamber.

Perhaps not every individual riff here is breathtaking, perhaps not every swell of orchestration truly immersible, but The Great Mass is well within the running as a metal album of the year contender. Where the last two efforts lacked some of the subtle, graceful doom of earlier records like The Ophidian Wheel, this actually serves as the perfect bridge between the various phases of the band's career (excluding the soppy melodeath drama of Revolution DNA). The Greeks put in a considerable amount of effort to this, and it has paid off like no one's fucking business. While it might fall a sliver shy of perfection, it's truly a culmination of the aesthetics they've been cultivating for over 20 years now; a richly evocative, mandatory sojourn to the occult fringe.