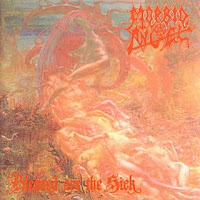 One needn't comb very far into the depths of the Morbid Angel sophomore to recognize that this is a very different beast than the band's exhilarating debut. The Jean Delville painting used for the cover (which had, coincidentally already been used by the Danish thrash band Hexenhaus for their debut several years prior) hints at a more classical, if no less diabolic premise, but the real aesthetic shift comes in the composition. Where Altars of Madness was a day at the hellhound tracks, Blessed Are the Sick is a stroll through the abyss, utilizing far more controlled tempos throughout the track list, as if the band were sobering up from the massive hangover they received from the blasting, precision chaos of its predecessor.

The truth is, the actual change of pace is not what cripples this album. The band still pulls out the stops where necessary, allowing Pete Sandoval more breathing room as he swerves between taut and manic bursts of speed and slower, swaggering grooves. The ideas circulating through these tracks will continue to turn up through the band's career, fleshed out further through albums like Domination, Formulas Fatal to the Flesh and Gateways to Annihilation. Nor would I lay the flaws upon the doorstep of David Vincent, who experiments with a more stolid death grunt in tandem with his bludgeoning barks. Blessed is the Sick is a beloved album, and an important album due to its chronological placement. In 1991, a lot of people were turning towards death metal as it emerged from the thrash landscape as an alternative to the shoegazing, funk, grunge and rap explosions of the period. I wouldn't be surprised if Blessed Are the Sick (like Human, or Tombs of the Mutilated, or Effigy of the Forgotten) was the first death metal album many were exposed to, and it makes sense: this is far more forgiving, and much less overwhelming than the band's 1989 masterwork.

The problems I have with Blessed Are the Sick, and have held for nearly 20 years despite numerous attempts to let it 'grow' on me, lie in the fact that the album is too clean for its own good, and too short on memorable songs. As the album lacks the labyrinthine punishment of the debut, there is nothing here that forces its way to the surface upon repeated listens. It's all laid out bare and accessible for the initial consumption. This wouldn't be an issue if I found that the content was memorable, but I can't think of a single song here that I'd every turn to if I was in need of a Morbid Angel fix. When the instrumental adornments on your album, like the fluted and creepy "Leading the Rats" outro, the plucky acoustic segue "Desolate Ways" and the cheesy and pompous synthesizer march "Doomsday Celebration" number among its more distinct offerings, then certainly the metallic core is lacking for something...

That said, I could never accuse the Floridian demi-gods of lacking some variation here, because if the sophomore has any leg up over its monolithic predecessor, its the more even split between faster and slower climes. You still receive the rapid brutality of "Brainstorm", "Rebel Lands", "Day of Suffering" or the smaller bursts in "Thy Kingdom Come", which are all pulled straight from the altars, yet uninhabited by individual riffs of such quality. More intricacy seems to have been placed in the crawling compositions like "Fall From Grace", "Abominations", and "Blessed Are the Sick" itself, which alternate between the slower passages of the debut, simpler chugging maneuvers and a glaze of occasional propulsion to ensure that the listeners (and Sandoval) do not fall asleep. Often, the band will incorporate some nice atmospheric touch, like the low growl that casts a cavernous din over "Abominations", or the popping, copious leads that slice through "The Ancient Ones", but neither seems to amplify the quality of the track.

Morbid Angel tries a lot here, despite the fact that the sophomore seems like the grizzled reduction of a piece of fine meat, its beautiful fat evaporated and a less juicy and tasty sirloin tip left behind for the consumer. Blessed Are the Sick is not a poor album, nor is it even unpleasant to sit through a few times, but it's incredibly underwhelming when there were such exorbitant alternatives in the field, fully delivering on their riffing value and morbid, atmospheric motifs. The ritualistic lyrics, often from the first person perspective, are not all bad. If I had to pick favorites among the metal tracks, I'd probably run with "Fall From Grace", "Rebel Lands", or "Blessed Are the Sick" (though "Caesar's Palace" expands its lurching strides with delicious misanthropy), but these deliver only a fraction of the brilliant, shiver inducing madness of a "Chapel of Ghouls", "Suffocation" or "Maze of Torment".

Evolution and innovation are not foreign concepts to Blessed Are the Sick, and the novelty of its placement in the death pantheon seems to have granted it the status of the sacred calf, leaving not a marginal influence in its wake (certainly there are scores of albums mirroring its sluggish and varied dynamics). Alas, next to the eponymous transgression of the debut, and the potential ghastly feast I had desired from its successor, this was and remains naught more than Meals On Wheels. Tore off the plastic, put it in the microwave, got a nice bite or two and some essential proteins, but too soon was I salivating over the next morning's breakfast.