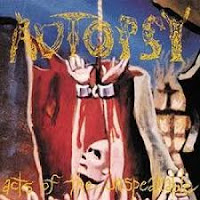 After the sloppy frolics of the Fiend for Blood EP, I worried that Autopsy's devotion to increasing primacy might have surpassed their better judgment, that the band would have decided to fuck around so for an entire album. Not that the EP was necessarily awful, it was...interesting, but as a big fan of Mental Funeral and Severed Survival, I was silently praying that some order might be restored. Turns out that my concerns were unjustified, and the band's third full-length Acts of the Unspeakable delivered on most of the same counts as its predecessors. There is definitely a ruddy sludge and grind motif tunneling beneath the material here, but they have compensated with enough vile, doomy riffs that the album can still deliver a few shivers.

One other minor change I noticed was in Reifert's vocals, which had taken on a stranger, almost conversational tone as opposed to the growling of the past. Where before he was the stuff of nightmare, a catacomb dweller gurgling guts through his primitive prose, he had here become the butcher's uncle, sitting on the porch out front of the slaughterhouse and reminiscing on the flanks he's carved, or the 'accidents' he's seen in his carnal surroundings. The production is not really up to snuff with Mental Funeral, so that was a minor distraction. The guitars simply don't carry the same coiled power through this mix. However, it lends a more spacious atmosphere like dust shifting through the air of a murder scene, curtains of descending, solemn doom. You'll also notice the increased amount of tracks here, 18 in all...and only two ("Your Rotting Face" and "Pus/Rot") manage to escape the 3 minute limit. Most are between 1-2:30 in length, so they're hurling less at you, but they manage to range themselves across a number of faster, slower and mid-ranged dynamics, so it's not some mindless grind record. The cover art is noticeably more abstract, but I still kind of enjoy it.

Personally, I find some of the more contrasted tracks here to be among the strongest. Opener "Meat" is quite good, with creepy guitar drawls that explode out into faster paced butchery, only to arrive at a very Demilich-like central rhythm. "Necrocannibalistic Vomitorium", which wins the song title award here ("Ugliness and Secretions" and "Battery Acid Enema" vying for the silver medal), offers a similar shift between doomed evil and a fast break, with some morbid, echoing lead work tucked in there. Other favorites include "Voices", a rather standard burst of muddied deathgrind with some fibrous, quality notes under its gore soaked eaves; "Funereality" for the atmosphere conjured through the warlike necrosis of the drumming; and for the sheer savagery, perhaps "Orgy in Excrements". "Skullptures" just rules, period. Most of the others here just seem to channel straight in one of my ears like carnivorous maggots and then straight out the opposite orifice, stopping for only a few bites of my brain. But they never breach protocol, so the album is a consistent, 35 minutes of splatter.

Autopsy had not thrown in the towel quite yet (don't worry, it's coming), but the Acts of the Unspeakable have nothing over their precursors other than a quantity > quality aesthetic. The landscape behind the band was beginning to change. Grunge, punk, sludge and other forms of primate brutality had gained viable ground, and it feels like Reifert and company were beginning to explore that direction rather than the sepulchral menace that they once shared with Death and Obituary around the turn of the decade. This change would ultimately manifest in the members' later band Abscess, but hints were being dropped well in advance, arguably through the subtext here. This is not at all the go-to album when I'm in the mood for Autopsy's lewd, unhinged, cryptic pungency, but it's not a huge decrease in quality.