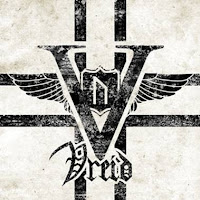 By this time, Vreid have established just as prolific of a portfolio as their prior incarnation, the late Windir. Albums like I Krig have been entertaining affairs, but I have felt for years that the band has yet to truly manifest its magnum opus. Considering all of the hype I've seen thrown at this fifth record, V, I was expecting to be lifted out of my seat and channeled back to ancient times of splendor. To be sure, this is probably the catchiest and most competent piece the band have ever delivered, with a good degree of variation spliced throughout the nine tracks. Alas, it is nowhere near the level of quality that I've been reading, and a number of flaws, like the monotonous and easily forgettable rasped vocals, hold it back from its potential.

Seriously, they just feel too loud and incongruous against the riffing, some of which are brilliant, others pandering to a pretty mediocre melodic death aesthetic. "Arche" is a strong opener, with a psychedelic subtext woven against the bombastic drumming and the superb melodies evoked. In particular I love how the leads here are interspersed through the composition, creating a fluid contrast of majesty and solemnity. In general, the band continue to grab for dense, thrashing black metal riffs that hit you straight in the gut, a characteristic of their early albums, but these are not always cast in the most inspiring sequences. Cuts like "The Blood Eagle" and "Wolverine Bastards" are packed with good intentions and solid ideas, especially the groovy lead bridge in the latter, but they don't leave an enormous impression. "The Sound on the River" is a more subtle, folksy departure until the bursts of aggression, and "Fire on the Mountain" presents a dutiful pagan thrashing, but it wasn't until the more psychedelic, Pink Floyd-stylings of "Slave" which the cleaner vocals that really found myself getting involved, and even here I though the black snarling was just too loud and distant from the instruments in the mix.

V is certainly not a negative fixture within the band's history, and I would say it shows the most thought and preparation of anything they've released to date. The production is a little too clean, but it works well enough for the guitars and drums. If you've found yourself in rapture of the band's prior albums, then you will likely find this catchier and I dare say more accessible. Vreid are not above hurling in some folk, rock or death metal elements, and the power of the guitar tone is enough to crush your gall bladder like a titan squeezing a boulder in its palm. Despite the tragic fate of their alma mater, there is ample evidence that the musicians are still endowed with creative force, but there are still paths to be traveled, trails to be cleared before they will be numbered among the Norwegian elite.